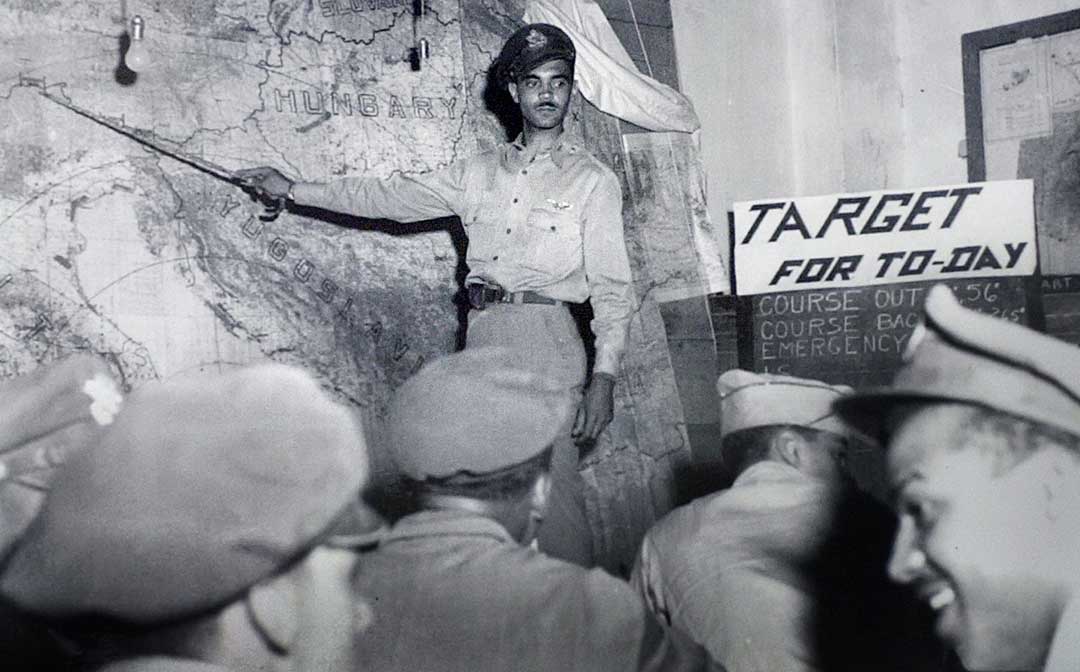 The Tuskegee Airmen were the first African American military aviators in the United States armed forces.  During their years of operation, 1940 to 1946, 996 pilots were trained at Tuskegee Army Air Field.  Approximately 445 were deployed overseas and 150 lost their lives during that period.  Sixty-six pilots were killed in action or accidents and 32 were captured and held as prisoners of war.

The Tuskegee Airmen served primarily in three units.  The first unit, the 99th Pursuit Squadron, was activated at Chanute Field in Rantoul, Illinois on March 19, 1941, nine months before the United States officially entered World War II.  They transferred to Tuskegee, Alabama in June, 1941 where they received pilot training.  At that time the unit had 47 white officers and 429 enlisted men. By mid-1942 nearly 3,000 white and black personnel were stationed at Tuskegee Army Air Field.  The African American personnel were placed under the command of Captain Benjamin O. Davis, Jr. one of only two black line officers then serving in the U.S. Army.  Davis reported to Major James Ellison, the commander of the 99th Fighter Squadron.

In April 1943, the 99th was deemed ready for combat and was transferred to North Africa where it was assigned to the 33rd Fighter Group.  There it first saw action and on May 30, 1943 the squadron attacked the small island of Pantelleria in the Mediterranean Sea to clear sea lanes for the Allied invasion of Sicily scheduled for July. The air strikes led the Italian population on the island to surrender to Allied forces on June 11.   The 99th moved on to Sicily where it continued to fly combat missions.

By January 1944, more Tuskegee pilots arrived ready for combat.  The 100th, 301st, and 302nd Fighter Squadrons, composed of Tuskegee-trained pilots, first saw combat in February 1944.  The 99th Fighter Squadron was transferred to the 332nd Fighter Group now under the command of Colonel Benjamin O. Davis, Jr., on May 1, 1944.  The 332nd Fighter Group which was initially engaged in dive-bombing and strafing missions, was stationed at Ramitelli Airfield on Italy‘s Adriatic coast and given a new assignment:  from June 1944 to March 1945 they would escort Fifteenth Air Force heavy bombers on raids into Nazi Germany.  When they received P-51 Mustang fighters marked by red paint on the tail section of their aircraft, the pilots of the 332nd became known as the Red Tails.

A third group of Tuskegee Airmen were trained in the U.S. to operate B-25 bombers.  Although they were organized as the 477th Bombardment Group in 1943, they did not complete their training in time to see overseas combat.

The Tuskegee Airmen flew 15,533 combat sorties on 1,578 missions during World War II. Fifty-five airmen were credited with destroying 112 German aircraft in the air.  Three Airmen, First Lieutenant Roscoe Brown, First Lieutenant Earl R. Lane, and Second Lieutenant Charles V. Brantley shot down three Messerschmitt Me 262 jet fighers over Berlin on March 24, 1945.  Three airmen, Captain Edward Toppins, Captain Joseph Elsberry, and First Lieutenant Lee Archer, shot down four planes during their service in Europe but no Tuskegee Airman got the coveted fifth “kill” which would have placed them in the rare “ace” category.  They and other airmen destroyed another 150 planes on the ground as well as approximately 950 railcars, trucks, and other motor vehicles.

The Airmen received three Distinguished Unit Citations. The 99th Pursuit Squadron’s first citation was awarded for its bombing and strafing of the enemy controlled airfield at Pantelleria, Italy between May 30 and June 11, 1943. The second citation was awarded to the 99th Fighter Squadron (the unit had been renamed) for successful air strikes against Monte Cassino, Italy. The 332 Fighter Group received a citation for participating in the longest bomber escort mission in World War II when American planes attacked Berlin, Germany from bases in Italy on March 24, 1945. Six weeks later on April 30, Nazi Germany surrendered ending the war in Europe.

The Tuskegee Airmen were often the subjects of incorrect claims that exaggerated or intentionally minimized their role and record in World War II aerial combat.  Yet the accomplishments of these pilots are best summarized by Dr. Daniel L. Haulman, historian of the Air Force Historical Research Agency and author of the 2011 article, “Nine Myths About the Tuskegee Airmen,” which is linked below.  Haulman writes: “Whoever dispenses with the myths that have come to circulate around the Tuskegee Airmen in the many decades since World War II emerges with a greater appreciation for what they actually accomplished.  If they did not demonstrate that they were far superior to the members of the six non-black fighter escort groups of the Fifteenth Air Force with which they served, they certainly demonstrated that they were not inferior to them either.  Moreover, they began at a line farther back, overcoming many more obstacles on the way to combat.”

Books on the Airmen:

A-Train: Memoirs of a Tuskegee Airman

Black Knights: The Story of the Tuskegee Airmen

Double V: The Civil Rights Struggle of the Tuskegee Airmen

The History of the Military and Civilian Pilot Training of the Negroes at Tuskegee, Alabama, 1939-1945

The Tuskegee Airmen: the Men Who Changed a Nation