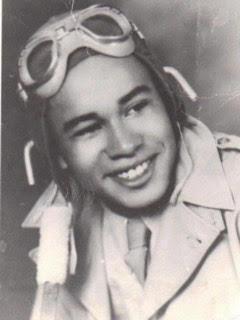 When the U.S. entered World War II in 1941, Biggs attempted to enter the U.S. Army but was turned down because of his age. He waited until he turned 18 and registered for the draft on July 2, 1943, a day after his 18th birthday. Once enlisted, Biggs completed basic training and then qualified for Aviation Cadet Training at Keesler Field in Biloxi, Mississippi. Biggs eventually trained at Tuskegee Army Airfield in Tuskegee, Alabama where he underwent a program in aerial gunnery at Tyndall Army Airfield near Panama City, Florida and then was selected for navigator bombardier training in September 1944. Biggs completed his navigator training later that year.

In June 1945, he became a Master Sergeant in the US Army Air Force. He then completed bombardier training in October 1945 and was assigned to a bomber crew with the 447th Bombardment Group. Despite his extensive training, Biggs never saw combat because World War II ended with the Japanese surrender on September 2, 1945. Biggs was discharged in 1946.

In 1948 Biggs reenlisted as a non-commissioned officer in the newly created United States Air Force. When the Korean War occurred, he became a second lieutenant where he flew missions over North Korea on B-29 Superfortresses from Okinawa and B-26 Marauders from South Korea. After the Korean War ended, Biggs returned to the United States. He was stationed at Little Rock Air Force Base and later stationed at Davis Monthan Air Force Base near Tucson, Arizona. He became one of the first African American officers at the base.

Like many African Americans in the U.S. military, Biggs faced racial discrimination from his white counterparts and superior officers. White pilots often openly stated that they did not trust his skills as a navigator. Nonetheless Biggs remained in the U.S. Air Force.

During the Vietnam War in the 1960s, he flew missions on B-52 bombers during the war. In July 1970, Biggs retired from the Air Force at the age of 45. He then began a career as an agent for the United States Customs Bureau, remaining with the agency until his second retirement in 1994.

In 2007, Biggs received the Congressional Gold Medal from President George W. Bush. On September 19, 2020, Biggs died in Tucson, Arizona at the age of 95. Biggs was married to Olga Biggs until his death. Biggs left behind 10 children, 22 grandchildren, and 24 great-grandchildren.