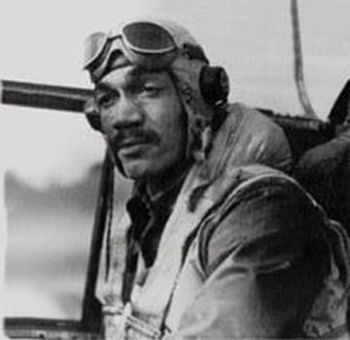 Lee Andrew Archer Jr., Tuskegee Airman in World War II, was born on September 6, 1919 in Yonkers, New York. His father was Lee Archer, Sr. and his mother was May Piper Archer. He was raised in Harlem and attended New York City’s Dewitt Clinton High School. In 1941, he left New York University where he was majoring in international relations to join the military. In 1941, Archer joined the Army and applied to become a pilot in the Army Air Corps but was rejected because the Corps did not allow blacks to become pilots during this time.

Congress in 1941 forced the Army to form a segregated Army Air Corps Unit in Tuskegee, Alabama. In December 1942, Archer was accepted into aviation cadet training. He completed the cadet course with honors and was Cadet Captain. On July 28, 1943 he won his wings. He finished number one in his class and was commissioned as a second lieutenant. He was immediately assigned to the 302nd Fighter Squadron of the 332nd Fighter Group. The 302nd Squadron was known as the “Hellions.” The unit, which flew P-51 Mustang fighter planes, was sent to Italy.

On July 18, 1944, Archer shot down three German Messerschmidt Bf 109 fighter aircraft, becoming one of only four World War II pilots to accomplish that feat and was awarded the Distinguished Flying Cross and the Legion of Merit among other distinctions for his valiant service. After his military service, Archer returned to school and completed his Bachelor’s degree at the University of California, Los Angeles on August 13, 1949. On October 22, 1956, he earned his Master’s in Government from New York University.

In 1970, Archer retired from the Air Force as a Lieutenant Colonel. He joined General Foods Corporation the same year as a Manager of Urban Affairs and one year later became corporate Director.  In 1973 he served as Chairman and CEO of Vanguard Capital Corporation but returned to General Foods as a Vice President in 1975.  Archer also served on the Board of Directors of Beatrice International Foods, Financial Holding, Inc., Panel-Light Corp, and the Institute of American Business.  Archer was also a member of Sigma Pi Phi fraternity.

In 2007, Archer was awarded the Congressional Gold Medal for his service by President George W. Bush. Three years later, on January 27, 2010, Archer died at the age of 90 from coronary complications in New York City Hospital.