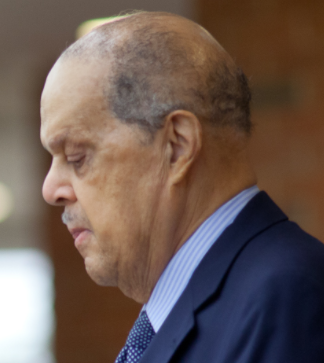 Dr. Randolph Bromery
© University of Massachusetts, Fair use image
This entry is sponsored by Catherine Foster

Geologist and college administrator Randolph W. Bromery was born in Cumberland, Maryland, on January 18, 1926, the son of Lawrence Randolph Bromery and Edith Edmonson Bromery. Graduating at the top of his high school class in 1942, he briefly worked as a machinist in Detroit, Michigan, before entering the United States Army Air Corps to train to be a pilot.

Bromery fought in World War II in Italy in the 332nd Fighter Group, famously known as the Tuskegee Airmen. At the end of hostilities in 1945, he enrolled at Howard University in Washington, D.C., but after a few years dropped out and found work as an airborne exploration geophysicist (later as a supervisory research geophysicist) with the U.S. Geological Survey. His years with the USGS involved him in projects from Alaska to West Africa. In 1948 he resumed his studies at Howard, earning the bachelor’s degree in mathematics and physics in 1954. He next obtained his master’s degree in geology at American University in 1962 and, with the assistance of a Gilman Fellowship, a doctorate in geology at Johns Hopkins University in 1968.

One of the nation’s first African American geophysicists, in 1969 Bromery began teaching as a geology professor at the University of Massachusetts at Amherst. He quickly gained tenure and became chairman of his department, then moved quickly from Vice Chancellor for Student Affairs in 1970 to Acing Chancellor of the university in 1971, thus becoming the third person of African descent to head a major, predominantly white, American institution of higher learning. He followed Patrick Francis Healy at Georgetown University in the 1870s, Clifton R. Wharton, Jr. at Michigan State University in the 1970s. During his eight years as Chancellor he facilitated the depositing of the collected papers of W.E.B. DuBois and of Horace Mann Bond in the library’s Special Collections and University Archives.

Bromery rejoined the faculty and taught from 1979 to 1988 as Commonwealth Professor Emeritus of Geophysics. He returned to administration when appointed Acting President of Westfield State College in 1988 and was President of Springfield State College from 1992 to 1999. From 2002 to 2003 he was Interim President of Roxbury Community College near Boston. During the administration of governors Michael Dukakis and Bill Weld, Bromery served as Chancellor of the Massachusetts Board of Regents for Higher Education.

As an exceptional scientist who studied the Earth’s magnetic field in relation to the location of minerals, Bromery authored more than 150 research papers, many of them published as journal articles and government reports. His graduate work at Johns Hopkins received an award from the U.S. Department of the Interior. In 1989 he was elected President of the Geological Society of America which later honored him with a service medal.

Bromery served on the board of directors of Exxon Corporation, Singer Company, Northwest Mutual Insurance, and John Hancock Insurance. He received several honorary doctorates including one from Hokkaido University in Japan, and his labors to encourage women, people of color—particularly African Americans—to study and advance in the field of geology and in STEM fields was acknowledged by, among others, the National Association of Black Geologists and Geophysicists.

Today Bromery’s portrait is on permanent display in the Hall of The National Academy of Sciences in Washington, D.C. He died February 26, 2013 in Danvers, Massachusetts, survived by his wife Cecile Trescott Bromery, five children, eleven grandchildren, and three great grandchildren.