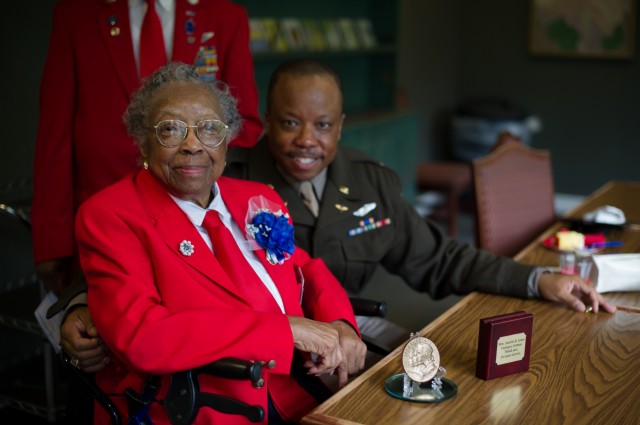 One of a handful of women to become members of the Tuskegee Airmen, Sergeant Amelia Robinson Jones was born on July 3, 1919, on Daufuskie Island, South Carolina, the youngest of fourteen children of Sipio and Susan Robinson. The family moved to Savannah, Georgia in her youth, and she attended A.E. Beach High School. She received her Bachelor of Science degree in Home Economics, from Georgia State College (now Savannah State University) in 1942.

Robinson enlisted in the Women’s Army Auxiliary Corps at Hunter Army Airfield in Kentucky, on February 10, 1943. She was called to active duty in September, to the 118th Army Air Force Base Unit and served in various states during World War II. She eventually rose to the rank of Sergeant. Robinson’s last assignment was at Godman Field in Kentucky, as Support Personnel, with the 99th Pursuit Squadron, under Colonel Benjamin O. Davis, commander of the Tuskegee Airmen. She supervised the postal service at Godman Field that was responsible for delivering mail to the aviators of the 99th.

Immediately after the war, Robinson married Henry W. Jones then used the G.I. Bill to earn a master’s in Food and Nutrition, at Howard University, in Washington, D.C. She worked for two years at A&T State College (now North Carolina A&T University), in Greensboro, North Carolina as a dietitian, before serving nineteen years as the Services Club Director at Fort Steward and Hunter Army Air Field in Georgia.

In September of 2014, Jones participated in the “Living History Meets Honor Flight” program, at the World War II Memorial in Washington, D.C. It was there that she met military historian John W. McCaskill and told him of her time in service with the 99th Pursuit Squadron. McCaskill had recently received a dual Masters’ degree in Military and American history, and his thesis topic was The Tuskegee Airmen. Knowing that Jones qualified to be listed as a member of this revered unit, he requested a copy of her discharge papers, and contacted the Hiram Mann chapter of the Tuskegee Airmen in Walterboro, South Carolina where he worked with several organizations to arrange an induction ceremony for Jones. He worked quickly, as Jones was in Hospice care.

Jones received the prestigious Tuskegee Airmen red jacket on October 25, 2014 along with the Congressional Medal for her service at the Mighty Eighth Air Force Museum in Pooler, Georgia. Less than six months later, on April 19, 2015, at the age of 96, Jones was presented with a bronze replica of the Congressional Gold Medal, at Hospice Savannah. The award was presented by U.S. Senator Johnny Isakson of Georgia, Brigadier General James Blackburn (retired), and Command Sergeant Major Stanley Varner (retired) of the command team for Task Force Marne, 3rd Infantry Division. The Congressional Gold Medal had been previously awarded to the Tuskegee Airmen as a group in 2007. Sergeant Amelia Jones died on Sep 22, 2015 at the age of 96 and is survived by her only son, Joseph Wilson Jones.