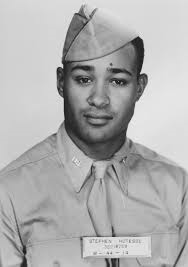 Esteban Hotesse was the only Dominican-born member of the famed Tuskegee Airmen, as well as one of the few people born in a Spanish-speaking nation to serve the United Stated during World War II. Hotesse was born on February 11, 1919, in the town of Moca, Dominican Republic. On November 1, 1923, at the young age of four, he, his mother, and his younger sister departed Moca for New York City, New York. After traveling through Ellis Island, they took up residence in Manhattan. Little is known of Hotesse from this point until he enlisted in the United States Army Air Corps on February, 21, 1942.

After his enlistment, Hotesse was assigned to the 619th Bombardier Squadron. In 1944 the 477th Bombardier Group M was reformed in order to work aboard B-25 bombers, following pressure by prominent civil leaders to incorporate African Americans into more crucial roles in the Army Air Corps. The 619th Squadron was included as part of this newly-reformed group. In March of 1945, the group was transferred to Freeman Army Airfield, near Seymour, Indiana. Although they never saw battle during the war, here they became famous for their involvement in the civil rights struggle through the instigation of the event now known as the Freeman Field mutiny.

After the 477th Bombardier Group M was transferred from Godman Field in Kentucky to Freeman Army Airfield, word got out that the Colonel Selway, the officer in charge of the base, had created two segregated officer clubs. Although all officer clubs were supposed to be integrated at this time, these rules were circumvented by a loophole. The first officers club was designated exclusively for “trainees,” who were all black, while the second officers club was designated exclusively for “instructors,” who were all white. On April 5, 1945, the last of the officers from Godman Field arrived in Indiana. Among these was then 2nd Lieutenant Esteban Hotesse.

For the next two days, black officers in groups ranging from twelve to twenty entered the whites-only club peacefully and were placed under arrest for breaking the rules of the base. A total of 101 officers of the 477th Bombardier Group M, including Hotesse, were arrested and returned to Godman in order to await trial. On April 23, under the direction of Army Chief of Staff General George C. Marshall, all the officers, with the exception of three men who were accused of pushing the white officer trying to prevent their entrance into the club, were released without any serious consequence. Many people would look back on this as an important milestone in ending segregation in the military, and also as a model for the strategy of civil disobedience used by many men and women during the Civil Rights Movement of the following decades.

Less than three months later on July 8, 1945, Hotesse and the rest of his five-member crew embarked on a typical aircraft training exercise. The crew took off from the Godman airstrip and gained altitude, heading toward the bombing range. After successfully dropping their payload, the co-pilot took control and, as directed, dropped in altitude to 100 feet above the Ohio River. Unfortunately, the plane went too low, and crashed, killing Hotesse, the pilot, and the co-pilot. He was only twenty-six at the time of his death, and he left behind his wife and two young daughters who were born shortly before he enlisted in the service.