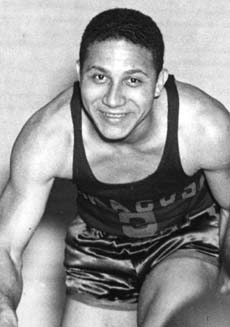 Wilmeth Webb, born February 13, 1918 in Washington, D.C., become the first star African American athlete at Syracuse University. His father, Elias Webb, died when Wilmeth was young, and his mother, Pauline Webb, remarried. Her new husband, Dr. Samuel Sidat-Singh, was a medical student from India. He adopted Wilmeth, giving him his name, and moved the family to Harlem to set up a medical practice.

Sidat-Singh attended DeWitt Clinton High School in the Bronx, where he was a star basketballplayer. He led his team to the New York Public High School Athletic League championship in 1934.

In 1935, Sidat-Singh accepted a basketball scholarship from Syracuse University. He led the team in scoring during his senior year and they went 40-13 during his career. After a football assistant coach spotted him in an intramural game, he was encouraged to play football for the University as well.

Sidat-Singh started his football career as a sophomore, playing singlewing halfback, a position similar to today’s quarterback. Syracuse University and the nearby Cornell University were among the first collegiate football teams to include African Americans as starting backfield players. Therefore when games were played in southern states enforcing segregation, African American players were frequently banned from the field.

Because of Sidat-Singh’s light complexion and his adoptive father’s last name, he was sometimes assumed to be “Hindu” and was allowed to play. However, shortly before a game against the University of Maryland, an article was published in The Baltimore Afro American that revealed his true racial identity. Sidat-Singh was forced to sit out of the game, and Syracuse lost 0-13. The following season, he did play Maryland, leading the Syracuse Orangemen to a 53-0 victory over the Terrapins at Archbold Stadium.

After graduating with a degree in zoology in 1939, Sidat-Singh played professional basketball with both the Syracuse Reds and the Harlem Renaissance. He then joined the Washington, D.C. police force.

In 1943, after U.S. entry into World War II, Sidat-Singh applied and was accepted into the U.S. Army Air Corps. He was assigned to the only pilot training program then available for African Americans, the Tuskegee Airmen.  After earning his pilot’s wings, Sidat-Singh tragically died during a training mission when the engine of his P-40 airplane failed over Lake Huron. The date was May 9, 1943, and he was only 25 years old. Today, Sidat-Singh is buried in Arlington National Cemetery in Virginia.