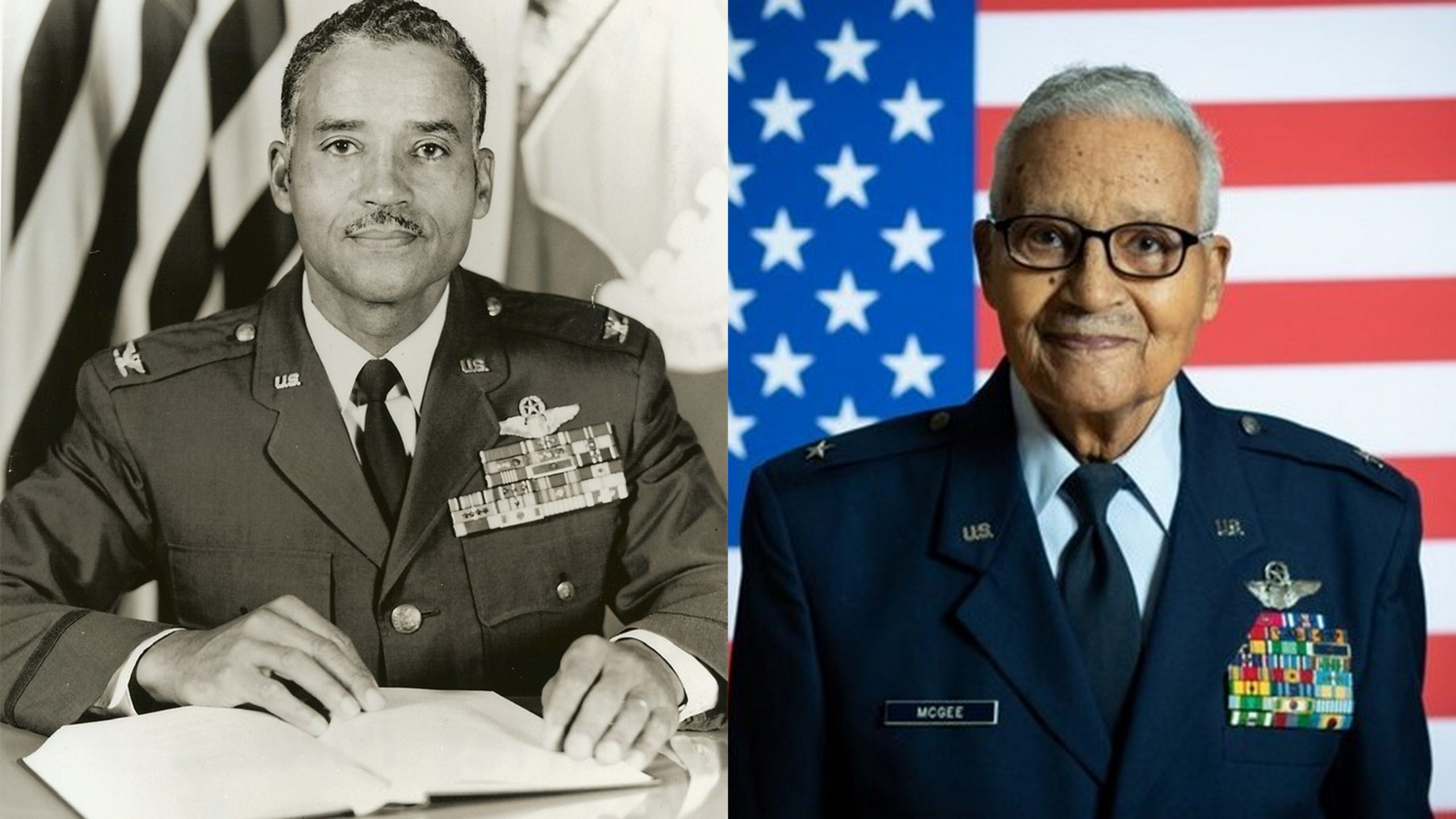 Tuskegee Airman Charles McGee is a retired fighter pilot whose legendary career spans three wars and four hundred and nine combat missions. McGee was born on December 7, 1919, to Lewis Allen and Ruth Elizabeth (Lewis) in Cleveland, Ohio. His father’s position as a minister, social worker and teacher led the family to move often. McGee’s mother died shortly after the birth of his younger sister, and he spent most of his youth involved in the Boy Scouts of America, having received its highest honor, the Eagle Scout Award at the age of twenty-one, on August 9, 1940.

McGee enrolled in the University of Illinois in 1941, studying engineering. He became a member of Alpha Phi Alpha fraternity and of the National Society of Pershing Rifles, a military fraternity. He met Frances Nelson in April of 1942, and the two were married by McGee’s father on October 17, 1942. The couple had three children, Charlene, Ronald and Yvonne. The day after McGee’s wedding, he received orders he was being drafted into the United Army Air Corps as an aviation cadet. McGee became a Tuskegee Airman, after earning his pilots wings, graduating from Class 43-F on June 30, 1943.

McGee flew his first mission on February 14, 1944, while stationed in Italy with the 302nd Fighter Squadron of the 332nd Fighter Group. While escorting B-17s over Czechoslovakia in August 1944, he engaged a formation of Luftwaffe fighters and downed a German aircraft. McGee was promoted to captain and returned to the United States to become an instructor on the North American B-25 Mitchell bombers at the Godman Army Air Force base in Kentucky and later at Freeman Army Air Force Base in Indiana. When that base closed in 1946, McGee was sent to Lockbourne AAF (now Rickenbacker ANGB) in Columbus, Ohio, where he served as Base Operations and Training Officer until 1948. When the Korean War broke out, he completed another 100 missions and was promoted to major. During the Vietnam War, now Lieutenant Colonel McGee flew 172 combat missions.

McGee escorted bombers over Germany, Austria and the Balkans during World War II. During the Korean War, McGee flew on 100 interdiction missions from Japan, and an additional 173 reconnaissance missions over Vietnam. He retired as a colonel on January 31, 1973, with 6,308 flying hours, and his 409 combat missions surpass any other pilot in the three wars.

In 1978, McGee completed his college degree interrupted by World War II, at Columbia College, Missouri, at the age of fifty-eight. He has received the Legion of Merit, Distinguished Flying Cross, Bronze Star, Air, USAF Commendation, Army Commendation Medals, Presidential Union Citation, Korean Presidential Citation, Distinguished Eagle Scout Award and many other military service ribbons. President George W. Bush awarded the Congressional Gold Medal to McGee and all other surviving and deceased Tuskegee Airmen on March 29, 2007. McGee was inducted into the National Aviation Hall of Fame in Dayton, Ohio in 2011, and on February 4, 2020, 100-year-old McGee was given an honorary promotion from Colonel to Brigadier General by President Donald J. Trump in a White House ceremony.