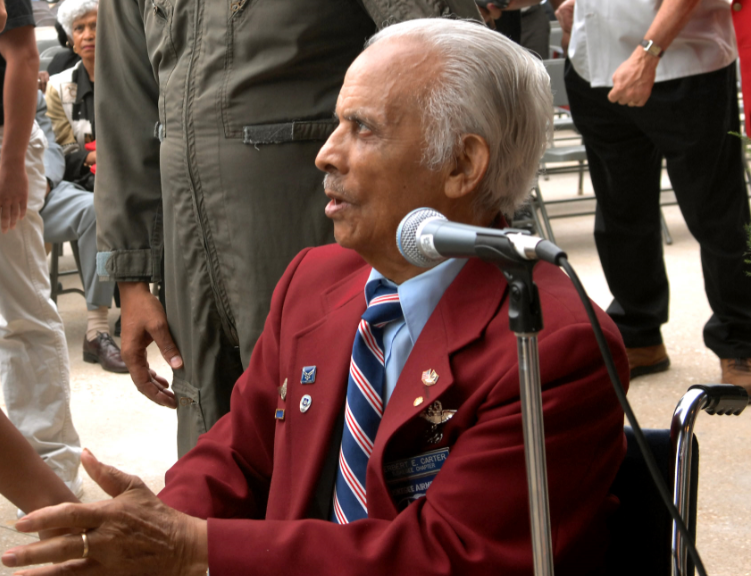 Herbert Eugene Carter was one of the original thirty-three Tuskegee Airmen. He flew seventy-seven missions with fellow Tuskegee Airmen during World War II. Carter was born on September 27, 1919 to Ann Sykes Carter and George Washington Carter in Amory, Mississippi. He attended Tuskegee High School, graduating in 1941, and then enrolled at Tuskegee Institute in Tuskegee, Alabama. Tuskegee at that time supported a new program where the United States Army began training African American men who wanted to become military pilots. Carter was accepted into the program in late 1941 and later graduated as a member of the fourth class, Class 42-F in 1942. After graduating, he was assigned to the 99th Fighter Squadron, one of the units of the Tuskegee Airmen. While at Tuskegee Carter married Mildred Hemmons who was also a pilot at the time.

Lieutenant Carter sent to North Africa where he flew the first of his seventy-seven combat missions against the German and Italian aircraft. As the war front moved to Sicily and then Italy proper, Carter engaged in air combat there as well. He flew in the Curtiss P-40 Warhawk and Republic P-47 Thunderhawk. Carter and the 99th Pursuit Squadron flew more than 3,000 missions in Europe when they destroyed almost around 300 enemy planes. Eighty-eight of the group’s pilots received the Distinguished Flying Cross.

After World War II ended, Carter returned to the United States and became a test pilot for experimental fighter aircraft at Wright Field in Riverside, Ohio until 1951. In the early 1950s, Carter returned to Tuskegee to become the Professor of Air Science and Commander of the Tuskegee Institute’s ROTC Detachment. He also took his teaching skills overseas to the German Air Force as the Deputy Director of the U.S. Military Advisory Group. Carter later became Chief of Maintenance of the 328th Fighter Wing stationed at Homestead Air Force Base, Florida where he managed maintenance of over 60 aircraft and supervised more than 700 personnel.

Carter who left Tuskegee and joined the Army Air Corps before completing college, finally resumed his studies at Tuskegee where in 1955 he received a Bachelor of Science degree in industrial education. He also received a Master of Arts degree in Administration and Supervision in 1969 also from Tuskegee University.

In 1963, Carter was assigned to Loring AFB in Maine to provide maintenance expertise as the Air Force tested the Convair F-106 Delta Dart fighter interceptor aircraft. Herbert Eugene Carter retired from the U.S. Air Force in 1969 at the rank of Lieutenant Colonel. After his retirement, he served as Associate Dean of Student Services and Administration at Tuskegee University until 1985.

Herbert Eugene Carter died on November 8, 2012 at the East Alabama Medical Center in Opelika, Alabama at the age of 93.