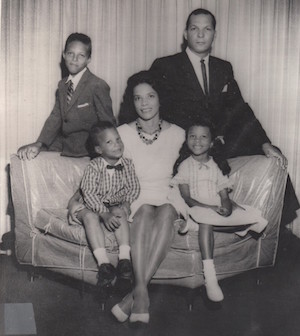 Attorney, civil rights activist, and medical expert Raymond L. Johnson Sr. was born in Providence, Rhode Island, on July 31, 1922 to Jacob and Lelia Johnson. After graduating from high school, Johnson attended Howard University in Washington, D.C. When World War II began, he was drafted into the United States Army. He was stationed at the Army Air Base in Walla Walla, Washington. After scoring high on an examination for pilot training, Johnson was transferred to the only training school in the United States for African American pilots in Tuskegee, Alabama, where he became a Tuskegee Airman.

Honorably discharged after the war, Johnson returned to Howard and completed his undergraduate degree. He then enrolled in a residency program at Rochester General Hospital in New York and received a degree as a medical technologist from the American Society of Clinical Pathology. Johnson returned to Washington and opened a diagnostic medical laboratory. He later supervised the hematology department at the National Institutes of Health in Bethesda, Maryland.

In 1953, Johnson entered Howard University Law School and concentrated on medical law and medical malpractice. While at Howard, he worked with noted civil rights attorney Thurgood Marshall and helped him prepare the Brown v. Board of Education case that found school segregation unconstitutional in 1954. Three years later, Johnson earned his law degree and moved to Los Angeles, California. He served as legal counsel on the staffs of Cedars Sinai, University, Westside, and Broadway hospitals.

During the 1960s, Johnson was a leader of the Los Angeles chapter of the National Association for the Advancement of Colored People (NAACP). After the Watts riots in August of 1965, he provided free legal aid to African Americans who were wrongfully arrested during the rioting and secured redress for those who were convicted without adequate counsel. He also worked to eliminate discriminatory hiring practices by major Los Angeles hospitals and reversed much of this policy.

Johnson received several awards from the NAACP in the 1970s and 1980s for his earlier work with the association. In 2007, President George W. Bush and the United States Congress gave him and 299 other Tuskegee Airmen the Congressional Gold Medal, the nation’s highest civilian honor.

Raymond L. Johnson Sr. died in Los Angeles on December 31, 2011, at the age of 89. He was survived by his wife, Evelyn, a daughter, two sons, and three granddaughters.