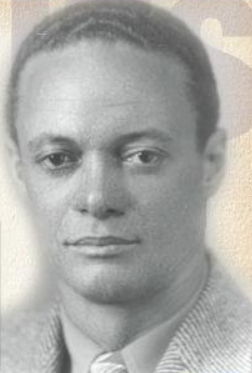 Fred Hutcherson Jr. was the first African American aviator to fly across the Atlantic Ocean. Born in Evanston, Illinois, on July 6, 1912, he was the oldest son of Fred Hutcherson Sr., a mechanic and grocery store owner, and Orain, a homemaker. His father supported young Hutcherson’s early fascination with flight and when his son turned 18, he brought him an airplane, the OX5 Travel Air open-cockpit biplane. Young Hutcherson taught himself to fly taking off from a dirt strip and practicing aerial maneuvers in the skies several miles west of Evanston.

Two years later at age 20, Hutcherson was hired to manage nearby Northwest Airport in Des Plaines, Illinois. With that post Hutcherson was the first black airport manager in the U.S. Later, he was employed as manager of Sky Harbor Airport in Northbrook, Illinois. By age 23 Hutcherson was making charter flights out of Harlem Airport in Robbins, Illinois, but as World War II approached he sought work in the United States Ferry Command, a quasi-military agency that transported military planes worldwide. Despite his considerable experience he was not hired as black pilots were banned by that agency. Married since a teenager to Regina Laurent, the couple and their son, Fred Hutcherson III, relocated to Montreal, Canada, in 1941 where he enlisted in the Royal Canadian Air Force (RCAF) which did not prohibit applicants of the basis of race.

By the time the United States had declared war on the Axis powers in December 1941, Hutcherson had attained the rank of captain in the RCAF and had begun instructing bombers pilots and navigators to assist the Allies. He transferred to the Royal Canadian Ferry Command, passed highest on qualifying exams, and in his capacity as a ferry pilot became the first person of African descent to fly a plane across the Atlantic Ocean. The first of his many transatlantic flights occurred 1942, and it narrowly avoided disaster when the engine stalled halfway over the Atlantic to Scotland. Hutcherson’s plane plunged 7,000 feet before he could restart the engine. He recalled in the Chicago Defender that in those heart-stopping few minutes his radio operator’s hair “turned from deep black to chalk gray.”

Still desiring to fight in World War II as an American serviceman, in 1943 Hutcherson quit his job as a pilot for British West Indian Airways to answer the call for experienced black aviators to assemble at Tuskegee Army Airfield. He joined the famed Tuskegee airmen and served out the war with them although he was not stationed overseas.

In the post-war years Hutcherson was a flight instructor at Ravenswood Airport in Illinois; founded a pilot school in Haiti where he also tried to establish the first black-owned airline; sold Beechcraft civilian planes, and was chief pilot for an airline in Colombia, South America. In 1956, Hutcherson started Lake Airways Charter Service which operated until 1959 when he was obliged to take over the family business in Evanston because of the death of his father.

At age 50, Hutcherson died of leukemia on his birthday, July 6, 1962. He was survived by his wife, Regina, and son, Fred Hutcherson III. Forty-nine years later in a White House Ceremony, on June 18, 2011, President Barack Obama awarded a Congressional Gold Medal replica to Fred III, a posthumous recognition of wartime contributions made by Hutcherson and hundreds of other Tuskegee airmen which the government had awarded collectively in 2007.