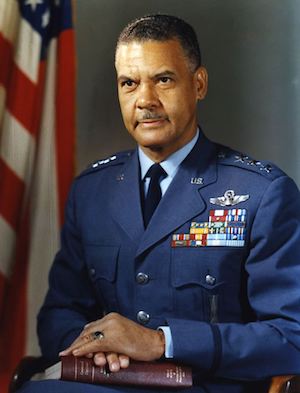 Benjamin O. Davis, Jr. followed in the footsteps of his trail blazing father as the first black general in the U.S. Air Force. He was born in Washington, D.C. on December 18, 1912, fully committed to a military career. He entered West Point Military Academy in 1932 and graduated thirty-fifth out of a class of 276 in 1936.  After graduating from the Academy he was assigned to the 24th Regiment then stationed at Fort Benning, Georgia.

At as time when there were serious doubts that blacks had the mental capacity to fly airplanes, he later joined a small number of African Americans in the first flying training program for blacks at Tuskegee, Alabama. His pace setting achievements led him to command the famed 99th Pursuit Squadron and later the 332nd Fighter Group in World War II. Beginning as an unwelcome addition to the Air Force, black pilots under the leadership of Colonel Davis established an enviable record of flying 15,000 sorties, shooting down 111 enemy planes and destroying or damaging 273 aircraft on the ground. White bomber pilots who once shunned the black fighter group as escorts quickly had a change of heart. The 332nd Fighter Group never lost a single escorted bomber in the group’s 200 missions.

Benjamin Davis Jr. who was awarded the Silver Star and Distinguished Flying Cross following World War II, served at the Pentagon and in several overseas posts. In the Korean Conflict he commanded the 51st Fighter-Interceptor Wing and flew an F-86. In May 1965, Benjamin Davis Jr. was promoted to the rank of Lieutenant General. General Davis retired in 1970 after 37 years of military service. In 1998, President Bill Clinton awarded General Davis with a fourth star raising him to the rank of full general. Benjamin O. Davis, Jr. died on July 4, 2002 at the age of 89 and was interred at Arlington National Cemetery.