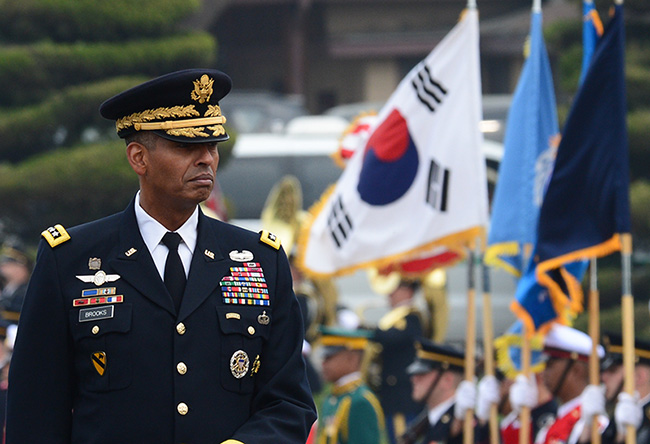 On October 25, 1940, Benjamin O. Davis Sr. was appointed Brigadier General in the United States Army by President Franklin D. Roosevelt, becoming the first African American general in the history of the United States Military. Since then nearly 400 other African American women and men have been appointed to that rank. The highest rank in the Army, Air Force, and Marine Corps is General (four star), followed by Lieutenant General (three star), Major General (two star) and Brigadier General (one star). Five men have held the rank of General of the Army (five star), George C. Marshall, Douglas MacArthur, Dwight D. Eisenhower, Omar Bradley, and Henry H. Arnold, who later became the only five-star general in the Air Force. The five-star rank is no longer attainable. In the Navy the top rank is “Admiral” (four star) followed by Vice Admiral (three star), and Rear Admiral (two star). In the Navy the rank of Fleet Admiral is rarely given. Only four men, William D. Leahy, Ernest J. King, Chester W. Nimitz, and William F. Halsey, Jr. have been named Fleet Admiral.

Additionally there are profiles of other significant African generals and admirals along with the black generals and admirals who have served in the military in other nations. As with all BlackPast.org compilations, this is a work in progress. If there are other commanders who have achieved the rank of admiral or general and you feel should be listed here, please send their names to [email protected], or better still volunteer to write entries on them.

Four Star Navy Admirals along with the year of their appointment

Four Star Army Generals along with the year of their appointment

The State Adjutant General (TAG) is the de facto commander of a state’s military forces including the Army National Guard, Air Force National Guard, the naval militia, and all other state defense forces in peacetime. The Adjutant General is usually appointed by the governor of a state. Listed below are the individuals who have served in this capacity along with their respective states and the dates of their appointment.