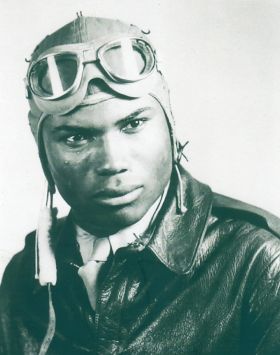 Tuskegee Airman Howard Adolphus Wooten was born on April 20, 1920 in Lovelady, Texas to parents Johnnie C. Morris Wooten and Howard L. Wooten.  His father was the principal of the “colored school” in Lovelady, a town 100 miles north of Houston, and his mother also was a teacher there.

Howard A. Wooten grew up on a farm near Lovelady and in 1937, at age 17, he entered Prairie View College on a football scholarship.  His main interest, however, was in aviation and he attempted to enroll in flight training programs.  His father objected because he didn’t think airplanes were safe and because he wanted his son to finish college.

Wooten dropped out of Prairie View College in 1940 and enlisted in the U.S. Army as a private assigned to a Field Artillery unit.  He rose through the ranks, becoming a Staff Sergeant in the 46th Field Artillery Brigade by January 1942.

Now 24, and no longer needing his parent’s permission to enter flight training programs, he applied to the Army Flight School at Tuskegee, Alabama in 1944 and graduated in December of that year.  After graduation he was assigned to the 15th USAAF Brigade as a fighter pilot, in the 332nd Fighter Group.

In January 1945 he was reassigned to the 477th Bombardment Group, where he was one of a select group of Tuskegee pilots who would train to fly North American B-25 Mitchell bombers.  Wooten was transferred to Mather Field, California for additional training.  Yet Wooten and the other men training on bombers would never see combat, as the war ended before they were sent overseas.

Wooten was mustered out of the U.S. Army Air Corps in 1946.  He then decided to become an attorney and moved to Seattle, Washington with four brothers and a sister, so as to get as far away as possible from “Jim Crow” Texas.  Soon after he arrived, he was hired as a production worker at the Boeing Airplane Company and joined the Aeronautical Machinists Union.  While working on the assembly line he met Josephine A. Stratman, another Boeing production worker.  They were married in 1947.

In 1948 the Machinists Union went on strike at Boeing.  Because he and his wife had an infant, Wooten joined the Painters Union and took work painting bridges around Seattle.  He died on August 20, 1948, at the age of 28, after he fell 70 feet from a scaffold while painting the 12th Avenue Bridge at the base of Beacon Hill.

Long after his death, Howard A. Wooten was memorialized by the U.S. Air Force when his World War II pilot’s photograph was chosen by an advertising agency to represent the famed Tuskegee Airmen.  His photo was first seen on Air Force recruiting posters in the 1990s and was later adopted as the official image of the Tuskegee Airmen Foundation.  The photograph from the National Archives has also been seen in public media including ESPN, Flight, Ebony, Sports Illustrated, and other periodicals.

Obituary of Howard A. Wooten published after his death in the Seattle Post Intelligencer, August 1948; conversations with his brothers Hayes L. Wooten, Octavius Wooten (deceased) and A.G. Wooten and his widow, Josephine A. Stokes.