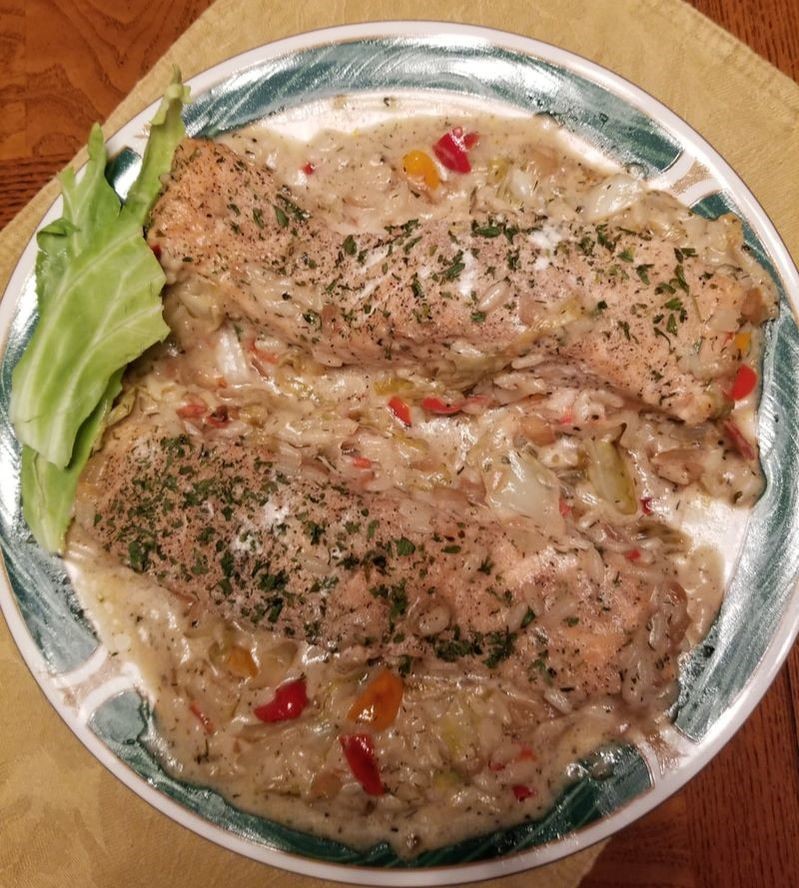 In the article below, culinary historian Diane M. Spivey describes the centuries-old diaspora of African foods and cooking traditions in North and South America.

Africa has been a major contributor to the cuisine of North and South America although this contribution has long been overlooked, trivialized, or denied.  The discourse contained in volumes on American cooking is usually consistent in its themes of celebrating what is considered the European influence.  When African American cuisine is recognized, as has increasingly been the case in the past few decades, credit is often given to a culinary heritage and legacy categorized and relegated to the culinary and cultural shackle known as “soul food” which specifically includes chitlins, corn bread, fatback, greens, and fried chicken.

The story of the African culinary past begins with “Lucy” and East Africa, the cradle of humankind and civilization.  Over thousands of years East African cuisine and culture slowly migrated to every other part of the African continent, diversifying and establishing new concepts, while retaining basic aspects and characteristics of the old.  Throughout the continent, prosperity arose out of superior agricultural environments and eventually the transcontinental trade and commerce in agricultural and other goods first to Asia and eventually to Europe and the Americas.

East coast cuisine and culture transplanted itself by means of explorers, merchants, travelers, and seamen bound for India, Indonesia, China, Southeast Asia, and Japan.  Spices sold and purchased at East African trading ports and in Indonesian and Southeast Asian markets would dominate the delicious flavors of creative cooks.  The Dravidians of southern India and the Khmers of Southeast Asia (modern Cambodia and Thailand), are two of numerous ancient Eastern civilizations that still bear many African culinary and cultural imprints.

Africa’s East and West Coast cultures made their indelible culinary marks through exploration, migration, and trade expeditions on the Olmecs and Mayans of Mexico, the Chavin of Peru, the Native American Mound Builders, the Caribs of St. Vincent, and other indigenous cultures in the Americas, and these marks were made long before the so-called discovery of America by Christopher Columbus.  Migration and trade between the Americas and Africa had made the exchange and transplanting of foodstuffs between the three continents quite common.  In other words, the African culinary influence on the Americas began long before the trans-Atlantic slave trade.

The last stage of this culinary diaspora was the forced migration of Africans to the Americas through the slave trade, beginning in the 15th century, which brought numerous culinary artists and expert agriculturalists to the Atlantic coast stretching from Argentina to Nova Scotia.  The continual influx and steady increase of Africans into the Caribbean and South America at the height of the human bondage trade ironically constantly rejuvenated the African cultural input, and fostered a culinary revolution under the influence of Africans that would permeate every aspect of cooking and cuisine in rural and urban areas of every country in the Americas.  Africans who were shipped directly to areas such as Louisiana and South Carolina, as well as those who endured the “seasoning” process in the Caribbean islands and were then transferred to the American South, all positioned their culinary standards throughout the Southern states.

West African cooks made certain that all fish, meat, vegetable, and beans and rice dishes were heavily seasoned with hot peppers and spices, such as Guinea grains, or melegueta, spicy cedar (called atiokwo in the Ivory Coast—its seeds are roasted, ground and used in soups or with leafy vegetables), tea bush (known as an-gbonto in Sierra Leone, its fragrant leaves are used to flavor meat dishes, vegetable, egusi and palm nut soups), African locust bean (harvested, boiled and fermented to produce dawadawa, an indispensable condiment in Nigerian and Cameroonian cuisine), and West African black pepper (fukungen to the people of The Gambia and Senegal), to name just a few.  Several oils were used in preparing West African dishes, such as groundnut, or peanut (which is sometimes preferred in stews), melon seed, sesame seed (gingelly), coconut, corn, shea butter, and palm, which remains the favorite in West Africa due to the reddish-orange color it imparts to foods.

Both these specific foods and the preparation and cooking methods came with the enslaved people to North and South America.  The cooking methods included frying, boiling/simmering, roasting and steaming (foods are first wrapped in banana, plantain, miraculous berry, cocoyam leaves, or corn sheaths) and baking, or combinations of two or three methods. Broiling has been added in the modern era.

Suriname, wedged between Guyana and Guiana on the northern coast of South America, was mostly populated by enslaved people whose descendants remain the majority of the population to this day. Food and cultural historians believe Suriname, at least until the early 1980s, had the best preserved African cultural patterns in the Western Hemisphere.  Suriname is home to the descendants of the Saramaka, or Saramacca, who live along the banks of the Suriname River, and the Djuka Maroons communities, formed in the early eighteenth century.  The ancestors of the Saramaka were agricultural specialists from Guinea, Senegal, Mali, Ghana, and Nigeria, who cultivated an enormous array of crops introduced directly from Africa, including moringa, which yields four edibles: pods, leaves, seeds, and roots; sorghum, known as guinea corn in West Africa which botanists confused with maize for a long time.  Other crops included tamarind, legumes such as marama, Bambara groundnut (African peanut), cowpeas (black eyed peas), locust and sword beans; as well as African eggplant.  Their descendants continued to produce those crops well into the 20th Century.

Rice was the principal crop cultivated by the early Saramakans, and is still produced today.  Known locally as alesi, the seventy cultivated varieties of rice comprise much of their current diet.  Rice production continues to incorporate African utensils and methods and the process is nearly identical to that of the Senegambia region, between the Senegal and Gambia Rivers in West Africa, as well as South Carolina plantations cultivated mainly by enslaved people in the 18th and 19th Centuries.

A variety of game meat, fish, and birds, preserved primarily by smoking and salting, includes akusuwe, a kind of rabbit; mbata, a small deer; malole, which is armadillo; and awali, or opossum, which are eaten only when nothing else is available to accompany rice.  Rounding out their larder is the tree porcupine, known as adjindja, in addition to logoso (turtle), akomu (eel), peenya (piranha), and nyumaa, or pataka, spoken of as “the best fish in the country.”

Anamu (bush hen), maai (bush turkey), gbanini (eagle), patupatu (wild duck), soosoo (large parakeet), and pumba(blue and red parrot) are also consumed in abundance.  While not all of these foods were found in West Africa, the Saramakans learned quickly to prepare them just as their ancestors had done in what is now Guinea, Senegal, Gambia. Large quantities of meat and fish are shared through family networks, lessening the need for preservation.  Preparation of foods includes roasting, frying, boiling, or browning meats first in one or more of five varieties of palm oil, then simmering with vegetables and/ or root crops and one or more of ten cultivated varieties of hot peppers.  Fifteen different varieties of okra are cultivated, along with mboa and bokolele (mboa is amaranth, but both are called wild spinach).  Tonka (beans), seven varieties of yams, tania, cashews and peanuts, and wild limes, watermelon, lemons, oranges, and pineapples, and other fruits specifically of African origin are also grown.

If the Saramakans managed to keep in place more African foods and cooking traditions than almost any other people in North and South America, the culinary culture of the African continent nonetheless influenced in various ways the cooking of the entire Atlantic seacoast from Canada to Argentina. From the rural country kitchens in Brazil or South Carolina to the steamboat floating palaces along the Mississippi River, to marketplace street vendors and restaurants in urban hubs of business and finance from Boston to Buenos Aires, Africans of North and South America have been a dominating presence in America’s kitchens, and have stood at the helm as creative head chefs of farms and plantations, restaurants, hotels, steamboats, lodges and private clubs, trains, and private homes of the elites.  From the 15th through the 19th centuries, Africans, as enslaved people, contributed their labor skills, religion, music, and culinary expertise to create societies and cultures in every country in the Americas, but especially in the United States.  The preservation and reinvention of culinary traditions and social patterns based on African heritage demonstrated strong cultural persistence and resistance within plantation, as well as Maroon, communities, which were established wherever slavery existed.

Similarities in African culinary heritage, shared especially throughout the Southern United States, Latin America, and the Caribbean, have left enduring legacies.  Those legacies are filled with cooking and cuisine strongly reminiscent of, or identical to, those of their African forebears and therefore continue to transmit the values and enrich the culinary experiences of not only Africans in the Americas but most other cultures in the Americas as well.  Although these nations have adopted African culinary traditions as their own, in most cases there is little or no recognition of their roots.  Certain aspects of African American cuisine, such as “soul food,” are too often seen as backward and lacking in value.  In general, the African contribution is regularly subjected to racism and societal repression.

For Africans and their descendants in the Americas, however, food and its preparation are deeply infused with social and cultural meaning, rooted in African traditions, and have always held an intrinsic role in creating, preserving, and transmitting expressions of ethnic cohesion and continuity.  It is hoped that there will be an eventual appreciation of African culinary heritage not just in the United States, but throughout the world.

Richard Price, “Subsistence on the Plantation Periphery: Crops, Cooking, and Labour Among Eighteenth-Century Suriname Maroons,” in The Slaves Economy: Independent Production by Slaves in the Americas, I. Berlin, and P. D. Morgan, eds., (London: Frank Cass, 1991);