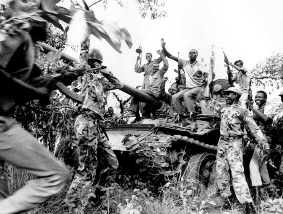 The Second Sudanese Civil War was an intense 22-year conflict between the central government in Khartoum and the Sudan People’s Liberation Army (SPLA).  The war started in southern Sudan but spread to other places including the Nuba mountains and the Blue Nile region. Two million people died in this conflict but the war also led to the creation of South Sudan as an independent nation in 2011.

The terms of the Addis Ababa Agreement in 1972, which ended the first Sudan Civil War, were violated several times. In 1978, president Gaafar Nimeiry wanted to take control of the newly-discovered oil fields located on the border region between north and south Sudan.  In 1983, President Nimeiry violated the agreement by imposing Sharia Law across the nation and abolishing the mostly Christian Southern Sudan Autonomous Region.  Most South Sudanese people and other people who were non-Muslim living in the north were now punished by Sharia Law.

In response, rebels from South Sudan formed the Southern Peoples Liberation Army (SPLA), led by John Garang, to fight the central government in Khartoum.  As in the first war, child soldiers were recruited by both sides but were more frequently used by the SPLA.  In April 1985, a coup occurred.  Nimeri was ousted and the new government rescinded his 1983 decree and made other overtures designed to reconcile the north and south. In May 1986, the new Khartoum government led by Prime minister Sadiq al-Mahdi and the SPLA led by Col. John Garang met in negotiations for the first time. At the same time the SPLA and other Sudanese political parties met in Ethiopia where they fashioned the Koka Dam declaration which called for abolishing Islamic law and convening a constitutional conference for the entire nation.

In 1988, the SPLA and the Democratic Unionist Party (DUP), a political party in Sudan, agreed on a peace plan which called for a cease fire and the abolition of military pacts with Egypt and Libya which had supplied the Khartoum government with weapons.  In February 1989, the Sadiq al-Mahdi government approved the peace plan but fighting continued into the 1990s with atrocities and human rights abuses occurring on both sides.

In July 2002, the Government of Sudan and the SPLM reached an agreement known as the Machakos Protocol, named after the town in Kenya where peace talks were held.  The talks continued into the following year and finally on January 9, 2005, the Government of Sudan and the SPLA signed the Comprehensive Peace Agreement which ended the civil war.  The agreement also called for the creation of South Sudan in 2011, six years after the war ended.