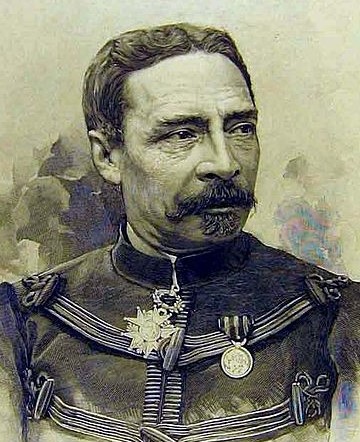 Alfred-Amédée Dodds on cover of L'Illustration, May 20, 1893
Public Domain Image

Alfred-Amédée Dodds, one of the ablest French army generals in the late 19th century, was mixed-race. Dodds was born February 6, 1842 in Saint-Louis, Senegal. He was the oldest of the seven children of Antoine Henry Ermery Dodds, a metis (mixed race) director of the local post office, and Marie Charlotte Billaud, also of mixed African-French ancestry. Allowed to be more upwardly mobile than dark-skinned Senegalese, mixed-race men like Dodds followed a traditional path to professional success: military service. Dodds’ grandfather, Englishman John Dodds, had been a military officer in the British Army. In 1862 young Dodds was packed off to study at Carcassonne, France and at the highly respected French military academy Ecole Spéciale Militaire de Saint-Cyr. Two years later he was a lieutenant in the French marines.

After helping to suppress rioting on the island colony of Réunion, 1868 to 1869 during which time he was wounded in an engagement, Dodds was promoted to captain. The following year he fought as a company commander in the Franco-Prussian War. Captured by the Prussians at Sedan, France, he escaped in time to distinguish himself in military actions in the Loir and l’Est. At the war’s end in 1871 he was dispatched to West Africa, beginning a career as a Colonial Army officer who over the next three decades would expand France’s control over that region and Southeast Asia.

As part of the French colonial army Dodds led a second campaign to subdue the Kingdom of Dahomey (modern-day Benin) and its eleventh ruler, Béhanzin, who was defeated in the decisive Battle of Abomey, on November 18, 1892. That defeat meant that he had helped consolidate the French colonial empire in West Africa that now stretched from Senegal and Guinea over 1,000 miles east to the border of British-controlled Nigeria. Dodds was promoted to Brigadier General and placed in command of the French 8th Colonial Army, some 50,000 French troops.

While pacifying French West Africa, Dodds was deployed briefly at intervals to French Indochina (now Vietnam) from 1878 to 1883, and in 1895 he was installed Commander in Chief of French military forces in French Indochina. In 1899, following a tour of French colonial possessions, he was appointed Inspector General of the marine infantry and shortly thereafter took command of the 20th Colonial Army Corps. From 1903 to 1907 he also commanded France’s naval troops (marines). In recognition of his long service to the Third Republic, Dodds was elevated to membership on the French Superior War Council (Conseil de Guerre Supérieur) from 1904 to 1914.

By the onset of World War I Dodds, now 72, was considered too elderly to be an effective military leader, thus he did not participate in that global conflict. Though married in his birthplace in Senegal in 1874 to Adèle Marie Madeleine Linckenheyl-Alsace, a woman eight years younger, their union did not produce offspring. By 1915 Dodds was a Grand Officer of the Legion of Honor and fully retired from public life. He lived quietly, dying in Paris on July 17, 1922 at the age of 80.