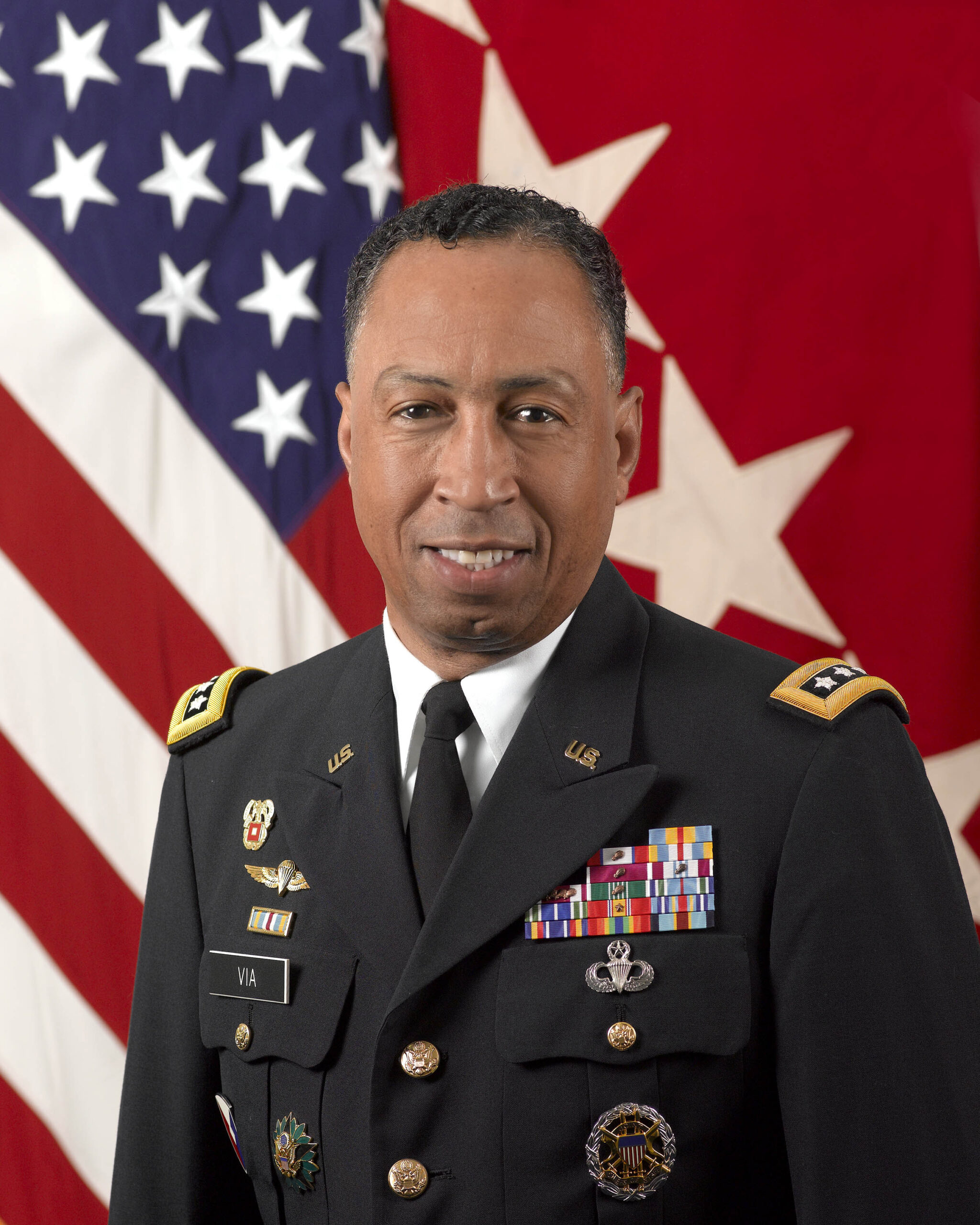 Army 4-star General Dennis L. Via was born in 1958 in the industrial town of Martinsville, Virginia, the son of Henry Via, a house painter and small-contract repairman, and Margaret Via, a homemaker. He had worked in a local textile mill and intended to skip college and become a building contractor until a high school teacher who taught him masonry convinced him to enroll at his alma mater, Virginia State University, a historically black school in Petersburg, Virginia, founded in 1882. At the end of his sophomore year, Via entered Army ROTC training and in 1980 graduated as a distinguished cadet with an officer’s commission.

Via’s first assignment was as a 2nd Lieutenant in the U.S. Army Signal Corps commanding troops as a platoon leader at Fort Bragg in North Carolina. Via rose to commander of the 3rd Signal Brigade and held staff positions at the battalion level and in the Department of the Army at posts in the United States, Europe, and Southwest Asia. He earned a master’s degree in management at Boston University in Massachusetts, then graduated from the United States Army Command and General Staff College in 1991, and the United States Army War College in 1999.

As a military educator Via contributed numerous articles on his fields of expertise in such publications as Army Magazine, Army Communicator, and Army Times. In 1999 he authored The Division G6: Strategic Signal Leadership for Information Superiority in the Army After Next, a 45-page report published by the U.S. War College.

In 2002, Via relinquished command of the 3rd Signal Brigade at Fort Hood, Texas, to take a desk job in Washington, D.C., but his most significant assignment was as the eighteenth Commander of Army Materiel Command, from 2012 to 2016, headquartered in Redstone Arsenal, Alabama. In this assignment, Via supervising a command with a presence in every state and 144 countries, employing more than 140,000 soldiers and civilians, and with a $50 billion budget. One of his major achievements was founding the United States Strategic Command’s Joint Task Force Global, this nation’s cybersecurity defense organization. In 2012, President Barack Obama nominated Via to advance to 4-star general, only the second Signal Corps officer to achieve full general rank. Via was the second graduate of Virginia State University’s ROTC program to achieve such high rank.

A member of the Council of Foreign Relations, Sigma Pi Phi and Kappa Alpha Psi fraternities, Via ended his 36-year military career in October 2016, retiring to his home in Woodbridge, Virginia. Married to his college sweetheart, the former Linda A. Brown, they have sons, Brian and Bradley.