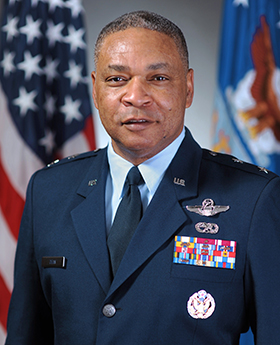 Dean’s last assignment was the Special Assistant to the Chief, National Guard Bureau, in Washington, D.C. As the Special Assistant, he was the principal staff officer and advisor to the Chief of the National Guard Bureau and as such was responsible for the performance of the 1,100-member National Guard Staff. Prior to that assignment, General Dean served as Deputy Chief of Staff for Operations, Allied Joint Forces Command, North Atlantic Treaty Organization (NATO), in Naples, Italy. There he was in charge of all military operations including, engagement and campaign assessment for ongoing and contingency operations engagement in the Balkans, Mediterranean, Middle East, and North Africa regions.

General Dean is an Air Force Academy graduate, class of 1978.  Over the course of his career he served in various command and operational staff assignments. His first command came in September 1994 when he was named Flight Commander of the 123rd Fighter Squadron, Portland, Oregon.  General Dean was also a commander of an Aircraft Maintenance Squadron and Fighter Wing, all with the U.S. 1st Air Force. From October 2013 until his retirement in 2015, General Dean was a Special Assistant to the Chief of the National Guard Bureau and he served as Acting Director of the National Guard Bureau, Joint Staff at the Pentagon.

After over 40 years of military service, a retirement ceremony was held in his honor on Dec. 6, 2015 in his hometown of Portland, Oregon.