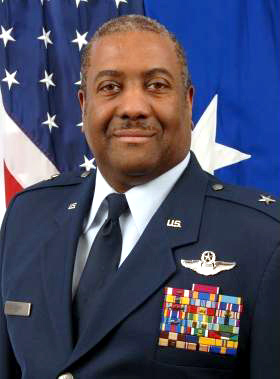 General Talbert’s 36-year military career included 30 years of DANG service. A product of the Delaware public schools, upon graduation from Wilmington High School in Dover, Talbert attended New York University, where he completed the Reserve Officer Training Corps (ROTC) program as a distinguished graduate. In 1972, he graduated with a B.A. in Economics from New York University and immediately entered Air Force pilot training earning his wings in 1973. He was assigned to Charleston Air Force Base, South Carolina and flew the C-141 jet transport aircraft. In 1979, he joined DANG as a part-time guardsman, while working on his M.B.A. at the University of Delaware, graduating in 1983.

Major General Talbert is a combat veteran, having flown numerous combat missions while deployed in Iraq and Kuwait, and in 1991 he served in Operation Desert Storm of the Gulf War. In 2002, he became Wing Commander of the 166th Airlift Wing, overseeing the largest mobilization effort in the Wing’s history in support of Operations Enduring Freedom and Iraqi Freedom. That year the Wing received the National Guard Association distinguished flying unit award.

At his military retirement in January 2009, Talbert was presented the Legion of Merit. Major General Talbert has been involved in several civic organizations. In 2012, he was inducted into the Delaware Aviation Hall of Fame. In 2018, Major General Talbert was inducted into the Organization of Black Aerospace Professionals Hall of Fame and became a member of the Delaware Technical Community College board of trustees. He is president of the John Porter Chapter (Dover) of the Tuskegee Airmen; a youth leadership subcommittee member of Wilmington HOPE Commission; and former president of Delaware’s General Bill Spruance Chapter of the Air Force Association and Delaware Tech Board of Trustees.

Since 1973, Major General Ernest G. Talbert Jr. has been married to Richelle Culley Talbert and their union produced two children, Chelley and Ernest.