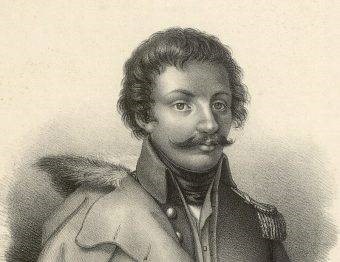 The astonishing appearance of a high-ranking Black military officer in late 18th century Poland who led troops across Europe and in the Caribbean is further evidence of the breadth of the African diaspora. The product of an illicit affair in Paris between British-born Princess Maria F. Dealire and an unnamed black butler, Wladyslaw Franciszek Jablonowski was born months later in Gdansk, Poland, on October 25, 1769. Despite the discomfiting circumstance of his birth his surrogate father, Konstanty A. Jablonowski, an army colonel and government administrator, gave the boy his surname and guided him on a career path similar to his own.

When he reached the age of 14 the young Jablonowski was enrolled in the elite French military school, Académie Militaire de Brienne, a branch of the Ecole Militaire de Paris. It was at the school that he first encountered fellow student Napoleon Bonaparte, the future emperor of France, who because of his darker skin, treated Jablonowski with unrelenting contempt. Upon graduating at age 17, Jablonowski was commissioned a lieutenant in the largely foreign-born, German-speaking Royal Allemand Régiment of the French Army. During the French Revolution (1789 to 1799) he allied himself with forces opposing the Old Régime and avoided prison or exile. However, in 1794, hoping to free his homeland, he was drawn back to Poland to fight in support of the Kościuszko Uprising against the armies of Prussia and Russia. As a lieutenant colonel he led Polish détachements in key engagements, most significantly the battles of Szczekociny, Maciejowice, Warsaw, and Praga and gained a reputation as a “good tactician and effective organizer.”

With the failure of the uprising, Jablonowski escaped to Austria where he and other Poles conspired to restore the independence of their homeland. He traveled to parts of Eastern Europe and the Ottoman Empire intending to organize and encourage other exiles and to provoke a military incursion into Russian territory, all to no avail. He returned to France and reentered the French army via its subordinate Polish legions. Under Napoleon’s command he led both cavalry and infantry units fighting in Austria and Italy against Russians and Austrians, most notably in the battles of Santa Maria di Falari, Magnano, and Cassano. With the end of hostilities Jablonowski was briefly put in charge of the Polish Danube Legion comprised of several thousand troops, but his command was terminated when the legion was disbanded.

Jablonowski’s loyalty and battlefield achievements went unrewarded by his nemesis, Napoleon. Even a personal appeal to the French emperor for promotion in May 1802 from the French Gen. Joachim Murat (Napoleon’s brother-in-law) was ignored. Finally, the intercession of Polish Gen. Jan Henryk Dabrowski (former commander of the Polish legionnaires) persuaded Napoleon to promote Jablonowski to brigadier general, but with the condition that he deploy to Saint-Domingue (Haiti). There he was tasked with leading Polish and French soldiers in suppressing the independence campaign of formerly enslaved Black Haitians led by Toussaint L’Overture. His one month of unremarkable activity in Haiti ended when he contracted yellow fever and died in the town of Jérémie on September 29, 1802, leaving stranded his fiancée, Anna Barbara Pênot de Loney, who had accompanied him to Saint-Domingue. He was only 33 at the time of his death.