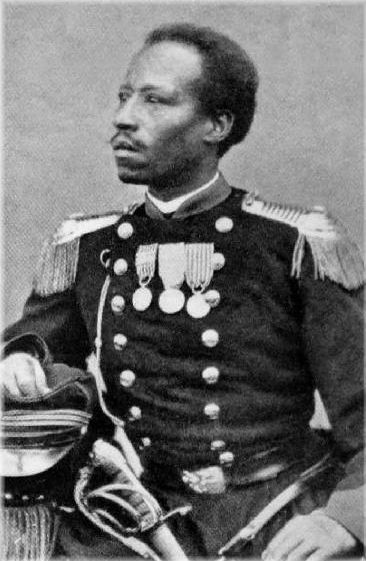 As a six-year-old boy named Quetto, Michele Amatore witnessed his village of Commi in the Nuba Mountains of southern Sudan decimated by Egyptian soldiers and their leaders who profited from the slave trade.  The oldest of four children, his father was a village chief named Bolingia; his mother was named Siliando.

The survivors of the savage raid experienced a nightmarish journey to the slave market in Khartoum, then on to Cairo where the boy was very fortunate to land in the home of an Italian, Luigi Castagnone—primary physician to the Khedive of Egypt and Sudan—who treated him well and gave him the rudiments of an education. At age nine, the boy traveled with Castagnone’s friend Maurizio Bussa, also a physician, to live in his new residence in Piedmont, northern Italy.  In 1838 the youngster converted to Catholicism and was baptized by the Bishop of Asti.  He shed his Muslim name (Sulayman al-Nubi) and adopted the Christian name Michele Amatore.

As a young man, Amatore returned to Africa and participated in the commerce that flowed from Cairo to Khartoum.  While there he also hoped to exact revenge on the enslavers of his people and he searched for family members scattered by the slave trade, a task that ultimately proved fruitless.

Back in Italy in 1848, as a patriotic citizen he enlisted in the military as a sharpshooter (a.k.a. bersagliere, riflemen distinguished by their wide black-feathered hats) to fight in the First Italian War of Independence (1848-1849) that pitted the Kingdom of Sardinia (Piedmont-Sardinia) against the Austrian Empire.  Between battles Amatore taught himself mathematics and French, and improved his penmanship.  For his courageous performance in the Battle of Solferino and San Martino during the Second Italian War of Independence (1859), he was bestowed the French Order of Merit.  Despite being a rare immigrant of color and lacking the advantage of military school training, by the Third Italian War of Independence (1866) he had risen to the rank of captain.  Amatore was made a Knight of the Crown of Italy and also a Knight of St. Maurice and of St. Lazarus, two long revered Piedmont orders.  Even the King of Prussia was inspired to have a bronze cross struck in his honor.  In the latter years of his 32-year military career, Amatore helped suppress banditry and rioters in southern Italy and assisted the effort to fight cholera in Sicily, for which he received a bronze medal of merit.

A sabre slash to the face that left a clearly visible scar also caused blindness in Amatore’s left eye and forced him to retire from military service in 1880.  By then, he walked with a noticeable limp.  Known as a personable and generous man, his life was commemorated by school children for decades after his passing, even during the fascist era when he was propagandized as being the quintessence of Italo-African fraternity.  Amatore and his Italian wife, Rosetta Brambilla, whom he married in Milan in 1879, settled in the picturesque green hills of Rosignano Monferrato east of Turin where he died, childless, on June 7, 1883.  Both he and his wife are buried in Turin where a street bears his name.