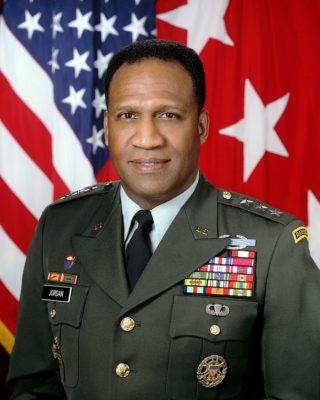 Larry Jordan was born on February 7, 1946, in Kansas City, Missouri. After graduating from Central High School in Kansas City in 1964, Jordan was accepted to the United States Military Academy at West Point. Jordan received a Bachelor of Arts degree in engineering from West Point and was given a commission with the U.S. Army as an armor officer. Jordan also received a Master of Arts degree from Indiana University at Bloomington in 1975. Jordan’s additional military education includes the U.S. Army Armor School, the U.S. Marine Corps Amphibious Warfare School, the U.S. Army Command and Staff College, the National War College, and the U.S. Army Ranger and U.S. Army Airborne Courses. In 1992, Jordan received a certificate for completing Harvard University’s National and International Security Management Program.

During his military career with the U.S. Army, Jordan has served in numerous staff and command positions at the company, battalion, brigade, and installation levels. From 1992 to 1995, Jordan was stationed at Fort Knox, Kentucky where he served as the commanding general of the U.S. Army Armor Center and School. In 1997, Jordan was promoted to the rank of Lieutenant General and subsequently assigned as the Inspector General of the U.S. Army, where he worked closely with the Secretary of the Army and Chief of Staff of the Army.

In 1999, Jordan became the deputy commanding general of the U.S. Army in Europe and the Seventh Army in Germany. Until that time, Jordan had served in various overseas areas including the Republic of Vietnam, Kuwait, Iraq, and twice previously in Germany. Jordan’s final assignment was as the deputy commanding general of U. S. Army Training and Doctrine Command at Fort Monroe, Virginia. Jordan also served as an Assistant Professor at West Point and as a member of the Combat Arms Training Board. After retiring from the U.S. Armed Forces in 2003, Jordan became the senior vice president of Burdeshaw Associates, LLC, a business consulting agency.  In 2013, Jordan left Burdeshaw Associates and became Principal of LNJ Group, LLC—another business consulting agency—where he has worked since.