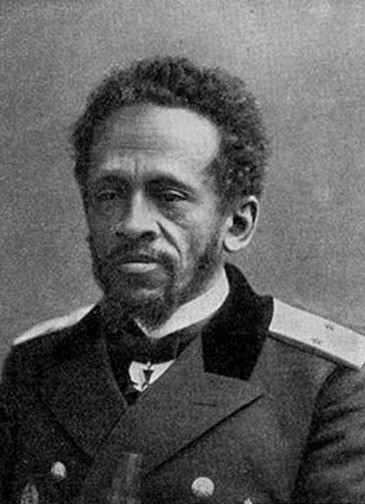 The details of the birth and appearance of Russian shipbuilder and military Gen. Mikhail M. Egypteos remain uncertain. There are two competing stories: One is that as a teenager from an aristocratic Ethiopian family he was taken, perhaps by force, to the Russian Empire by sailors and somehow wound up in the court of Czar Nicholas I; the other is that he was born the son of an unnamed Black artist working on commission at the imperial court and an unnamed Russian noblewoman. He may have been overseen by members of the court staff. In any event, his intelligence and ambition were apparent since Egypteos was sent to the Czar Nicholas I Academy where he graduated with high honors in 1881. He later graduated from the Naval Construction Department of Kronstadt Engineering College and completed a course of study in naval architecture at the Imperial Naval College.

Egypteos began work as a ship repair specialist at the Kronstadt port, where he soon became senior assistant shipbuilder and distinguished himself by shepherding a plan that produced a reconnaissance cruiser with a 1,200-ton displacement. Certified a junior shipbuilder, in 1900 he was ordered to work at the Nevsky shipbuilding and mechanical plant where he was to help supervise the assembly of boilers and mechanisms for two Novik-class cruisers and five Cyclone-class destroyers. In 1904, the naval hierarchy recommended that the design and construction of a device to prevent mines from detonating near ships be directed by Egypteos and one other engineer. That same year he was made chairman of a technical commission assisting the Special Committee for Strengthening the Navy for Voluntary Donations and rendered expertise on shipbuilding and the issuance of orders for ship construction.

Promoted to colonel, in 1907 he chaired another technical committee that oversaw the construction of a Novik-class turbine mine cruiser. Promoted to chief ship engineer and head of the shipbuilding department in 1909, two years later he was promoted to major general (later the equivalent to rear admiral) in the Russian Corps of Naval Engineers.

Egypteos was both prescient and wise in choosing to side with the Bolsheviks throughout the tumultuous Russian Revolution (1917 to 1923), a decision that may very well have saved his life. Living in St. Petersburg (then called Petrograd) with his wife and daughter during this violent, uncertain period, he was a member of the Military Revolutionary Committee. Then he worked at Sudproekt, the Soviet shipbuilding project agency, and was appointed its deputy director in 1923.

After 42 years of military service, Egypteos exited as lieutenant general of the Corps of Naval Engineers. During his career he was awarded the medals of St. Anne, St. Vladimer, and Emperor Alexander III. In retirement he took the helm of the private company Nevskii` Shipbuilding Yard in St. Petersburg. Egypteos died in Leningrad in 1932 at the age of 71.