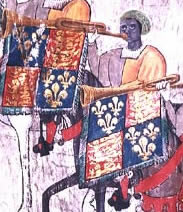 John Blanke, musician at the Court of Henry VIII

Utilizing the research of Professor Dominique-René de Lerma of Lawrence University in Appleton, Wisconsin, historian William J. Zick in the article below provides vignettes which comprise an overview of various composers and musicians of African ancestry who performed in Europe, North America, and Latin America from the 16th Century to the 20th Century. His listing begins with the earliest known black performer, John Blanke, a royal trumpeter in the Courts of Henry VII and Henry VIII.

English Royal records document the employment of John Blanke, listed as “the blacke trumpeter” and paid by the day by both Kings Henry VII and Henry VIII.  A pictorially illuminated manuscript of the Tournament of Westminster on New Year’s Day in 1511, commissioned by Henry VIII to celebrate the birth of his son (who died as an infant) to his wife Catherine of Aragon, clearly portrays Blanke as a mounted black trumpeter.

Ignatius Sancho (1729-1780) was an African composer and author whose published letters tell much about his life.  Raised as a house slave in Greenwich, England, he taught himself to read and educated himself very broadly from books owned by an aristocratic family with whom he obtained employment as a young man.  Sixty-two of his short compositions survive in four self-published volumes.

Le Chevalier de Saint-Georges (1745-1799), an Afro-French composer, violinist, and conductor, won his first fame not as a musician but as France’s best fencer.  Born Joseph de Bologne, on December 25, 1745 on a plantation near Basse-Terre, on the French Caribbean island of Guadeloupe, he was the son of a slave woman of African descent and a French plantation owner.  Educated in France, de Bologne was only 19 when his mastery of the violin and the harpsichord earned him a dedication from Antonio Lolli in 1764.  More came from François-Joseph Gossec (1766) and Carl Stamitz (1770).  By 1771, Saint-Georges was first violin of a distinguished 70-member ensemble, Le Concert des amateurs.   He became one of the earliest French composers of string quartets and symphonies concertantes.  His first string quartets were performed in 1772 and published in 1773, the year in which he was appointed conductor.  He later conducted Le Concert de la Loge Olympique, with which he premiered Haydn’s “Paris Symphonies” in 1787; and finally Le Cercle de l’Harmonie.  Saint-Georges directed an important private musical theater, where some of his own songs and musicals were performed.

José Mauricio Nunes Garcia (1767-1830), an Afro-Brazilian and a Roman Catholic priest, was an organist and chapel master in the Cathedral of Rio de Janeiro.  Most of his music was liturgical; about 240 works survive.  In 1817 Garcia wrote Brazil’s first opera, Le Due Gemelle (The Two Twins), which was later destroyed by fire.

George Bridgetower (1780-1860) was a child prodigy with an African American father and a German mother.  As a child he joined the retinue of the Prince of Wales (later George IV), who arranged music studies with established musicians.  In 1802 Bridgetower obtained permission to travel to the Continent to visit his mother.  In the Spring of 1803 he met Beethoven, who quickly wrote his “Sonata for Violin and Piano, Op. 47” for him.  Beethoven played the piano and Bridgetower played the violin at the highly successful premiere of the sonata in Vienna on May 24, 1803.  Before the work was published, the two men had a disagreement, causing Beethoven to replace Bridgetower’s name on the manuscript with that of Rodolphe Kreutzer.

Francis “Frank” B. Johnson (1792-1844), a Philadelphia bugler and band leader, was the most popular black composer in the pre-Civil War United States.  He published his first work, “A Collection of New Cotillions” in Philadelphia in 1819.  Johnson’s band soon became the leading musical group for social events and marches in the region. Despite their popularity, racial violence broke out during at least one concert.  The members were also arrested and fined in St. Louis for entering the State of Missouri as free blacks without official permission.  In 1837, Johnson and his band members became the first African American musicians to travel to Europe to perform.  Their triumphant return to the United States in 1838 generated more notoriety as they now performed outdoor “Promenade Concerts” throughout the Northeast.  Johnson composed “Honor To The Brave: Gen. Lafayette’s Grand March,” which became a popular tribute to the French military leader who helped the United States win its freedom from Great Britain.  The composition can be heard on the CD “The Music of Francis Johnson and His Contemporaries: Early 19th-Century Black Composers”.

The Negro Philharmonic Society was founded in New Orleans well before the Civil War.  The orchestra at one point had more than 100 performers, including a few white members.  Its director, Constantin Debergue, was a black violinist.  Racial hostility put an end to the Society prior to the Civil War.  Two of its former members, Edmond Dede (1827-1903) and Charles Lucien Lambert, Sr. (c.1828-1896) fled New Orleans in the 1850s and made successful careers in France and Brazil.  Dede graduated from the Paris Conservatory and worked as a conductor in Bordeaux, France for 27 years.

Justin Holland (1819-1887), was a classical guitarist who composed and arranged hundreds of works which were widely played in the 19th Century.  After two periods at the Oberlin Conservatory in Ohio, he became Cleveland’s first black professional classical musician and music teacher.

José Silvestre White (1835-1918) was an Afro-Cuban violinist who excelled at the Paris Conservatory and later served as a professor there for many years.  During the 1875-1876 season White performed twice with the New York Philharmonic under Conductor Theodore Thomas.

Thomas “Blind Tom” Wiggins (1849-1908) was a blind and autistic Georgia-born slave who was a classical pianist and a composer of popular songs.  Owners and managers kept control of Wiggins and his huge income all his life prompting Geneva Handy Southall, his biographer, to subtitle her account of him, “Continually Enslaved.”

Scott Joplin (1868-1917) was known as the “King of Ragtime,” but he also composed classical works.  His opera “Treemonisha” has been performed by the Gunther Schuller and the Houston Grand Opera.

Samuel Coleridge-Taylor (1875-1912) was an Afro-British composer who wrote Hiawatha’s Wedding Feast in 1898.  His composition was performed in concert over 200 times and made his name a household word on both sides of the Atlantic.

William Grant Still (1895-1978) was an oboist, arranger and composer of jazz and popular music themes.  He incorporated the Blues and jazz in his “Afro-American Symphony” which premiered in 1931 and is still one of the most recognized classical works by a black composer.