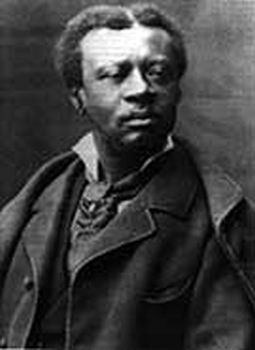 Musician and composer Edmund Dédé was born on November 20, 1827 in New Orleans, Louisiana. His parents were free Creoles of color who moved to New Orleans from the French West Indies around 1809. Dédé took his first music lessons from his father who was a bandmaster for a local military group.

Dédé soon became a violin prodigy after studying under Italian-born composer and theater-orchestra conductor Ludovico Gabici, and conductor of the New Orleans Free Creoles of Color Philharmonic Society Christian Debergue. Dédé advanced his technique studies in New Orleans under Eugene Prevost, French-born winner of 1831 Prix de Rome and conductor of Orchestras at the Theater d’Orleans, and Charles Richard Lambert, who was a free black musician, music teacher, and conductor from New York who had moved to New Orleans.

In 1848, Dédé moved to Mexico, as did many free Creoles of color after race relations in New Orleans worsened following the end of the Mexican-American War. Dédé returned to New Orleans in 1851 where he wrote and published “Mon Pauvre Coeur” (My Poor Heart), which is considered the oldest piece of sheet music published by a New Orleans free Creole of color.

Dédé worked as a cigar-maker, which allowed him to earn enough money to move to Europe to further pursue his music education. In 1857, he entered the Paris Conservatory for Advanced Musical Study. He then moved to Bordeaux where he became conductor for the L’Alcazar orchestra. Good trade relations between Bordeaux and Louisiana meant a large number of free Creoles of color settled in the French town, and Dédé experienced less racial prejudice in France than in the United States.

During his years in Bordeaux, Dédé was a popular and prolific music composer, writing ballets, operettas, opera-comiques, overtures, and more than 250 dances and songs. The vast majority of the surviving copies of Dédé’s works are from this period of his life, stored at the National Library of France in Paris. Despite his enormous popularity in France, the performance of Dédé’s Quasimodo Symphony by a New Orleans orchestra in 1865 was a rare American performance of one of Dédé’s compositions.

In 1864, Dédé married Sylvie Leflat, a French woman of the elite class. The two had a son, Eugene Arcade Dédé, who also became a composer and musician.

Dédé made one return trip to New Orleans in 1893, when his ship hit bad weather and was forced to dock near Galveston, Texas for two months; his prized Cremona violin was lost in the event. He remained in the United States until 1894 and spent some time travelling to cities around the country to give violin concerts. He returned to Paris in 1894 and died there in 1903.