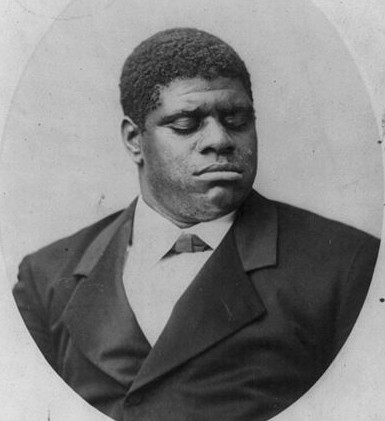 Thomas Greene Wiggins was born May 25, 1849 to Mungo and Charity Wiggins, slaves on a Georgia plantation. He was blind and autistic but a musical genius with a phenomenal memory. In 1850 Tom, his parents, and two brothers were sold to James Neil Bethune, a lawyer and newspaper editor in Columbus, Georgia. Young Tom was fascinated by music and other sounds, and could pick out tunes on the piano by the age of four. He made his concert debut at eight, performing in Atlanta.

In 1858 Tom was hired out as a slave-musician, at a price of $15,000. In 1859, at the age of 10, he became the first African American performer to play at the White House when he gave a concert before President James Buchanan. His piano pieces “Oliver Galop” and “Virginia Polka” were published in 1860. During the Civil War he was back with his owner, raising funds for Confederate relief. By 1863 he played his own composition, “Battle of Manassas.” By 1865, 16-year-old Tom Wiggins, now “indentured” to James Bethune, could play difficult works of Bach, Chopin, Liszt, Beethoven, and Thalberg. He also played pieces after one hearing, and memorized poems and text in foreign languages. Advertising claimed Tom was untaught, but in fact he was tutored by a Professor of Music who traveled with him.

James Neil Bethune took Tom Wiggins to Europe where he collected testimonials from music critics Ignaz Moscheles and Charles Halle, which were printed in a booklet “The Marvelous Musical Prodigy Blind Tom.” With these and other endorsements, Blind Tom Wiggins became an internationally recognized performer. By 1868 Tom and the Bethune family lived on a Virginia farm in the summer, while touring the United States and Canada the rest of the year, averaging $50,000 annually in concert revenue. James Bethune eventually lost custody of Tom to his late son’s ex-wife, Eliza Bethune. Charity Wiggins, Tom’s mother, was a party to the suit, but she did not win control of her son or his income.

Blind Tom Wiggins gave his last performance in 1905. He died three years later on June 13, 1908 at the age of 59 at his manager’s home in Hoboken, New Jersey.