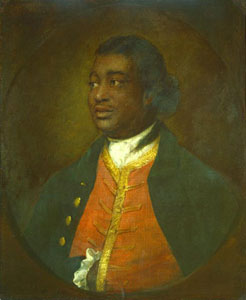 Ignatius Sancho was an African composer and author who grew up as a house slave in England. We do not know how Sancho left domestic servitude but according to historians by the time he was an adult he was an emancipated employee of the Duke and Duchess of Montagu. There, working as a butler, he flourished, reading voraciously, writing prose, poetry, and music.

Sancho married Anne Osborne, a West Indian woman of African descent, in 1758.  They had six children. The Duke and Duchess of Montagu provided Sancho money which enabled him to leave domestic service and buy a grocery shop in Westminster in 1773.  By the early 1770s Sancho had transformed himself from a house servant to a man of refinement and accomplishment, penning letters to friends and sympathizers around the country.  In 1768, the British painter Thomas Gainsborough painted his portrait.

Sancho sold sugar, tea, and tobacco among other staples from his store.  Many customers came to his store for his advice and company as well.  One was Charles James Fox, for whom Sancho voted in the 1780 election.  With that vote Sancho became the first known black person to cast a ballot in Great Britain. Two years later Fox became Britain’s first Foreign Secretary.

Ignatius Sancho is best known for his letters about slavery.  He sent missives to leading novelists describing himself as a black person and a former slave. He then urged the novelists to use the writings to condemn slavery in the British West Indies.  Besides his political involvement, Sancho, an amateur composer, published his own music.  His surviving pieces consists of one set of songs and three sets of dances, all published over roughly a twelve-year period between 1767 and 1779.  They total 62 short compositions.  Ignatius Sancho died in London in 1780.

Josephine R.B. Wright, ed., Ignatius Sancho (1729-1780), An Early
African Composer in England: The Collected Editions of His Music in
Facsimile