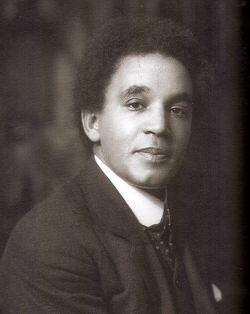 Born on August 15, 1875 to a physician from Sierra Leone and an Englishwoman, musical composer and conductor Samuel Coleridge-Taylor grew-up in Holborn, England.  He revealed his musical talents at the age of five, began studying the violin at the age of seven, and entered the Royal College of Music in London at the age of fifteen.  By the mid-1890s, due largely to his association with the African American poet Paul Lawrence Dunbar and inspired by the London performance of the visiting Fisk Jubilee Singers from the United States, Coleridge-Taylor begin reflecting the African American experience in his music.

By 1898 when only 23 years of age, Coleridge-Taylor was commissioned to write his Ballade in A Minor for Britain’s Three Choirs Festival.  He is perhaps best remembered for Hiawatha’s Wedding Feast, the first of three parts based on poet Henry Wadsworth Longfellow’s Song of Hiawatha.  Coleridge-Taylor’s overture to this particular piece was drawn from the black American spiritual: “Nobody Knows the Trouble I’ve Seen.”

Coleridge-Taylor’s numerous works were essentially pan-African.  He is often described as an Afro-English composer and conductor, receiving rave reviews in England and in America.  He toured the United States during its post-Reconstruction era and met such notables as the poet James Weldon Johnson and statesman Booker T. Washington.  He was a guest at the White House during the administration of President Theodore Roosevelt.

Samuel Coleridge-Taylor, proliferate musical genius of two continents and beyond, whose works bridged and reflected the African Diaspora, died on September 1, 1912, at the early age of 37 from pneumonia.