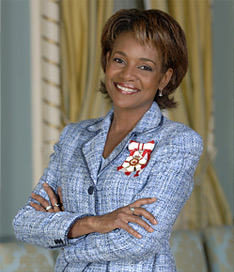 Michaelle Jean, the Governor General of Canada, was born in Port au Prince, Haiti in 1957. At an early age Jean and her family fled the Papa Doc Duvalier dictatorship and settled in Montreal, Canada. Jean later attended the University of Montreal where she received a Bachelor of Arts in Italian and Hispanic language and literature, and continued her studies toward a Master of Arts in comparative literature. Upon completion she pursued linguistic and literary studies at the University of Perouse, the University of Florence and the Catholic University of Milan, becoming fluent in five languages.

During her early working years Jean actively contributed to the establishment of a network of emergency shelters for battered women throughout Quebec and elsewhere in Canada. Jean’s appreciation of national and international realities led her to a career in journalism. She has been a highly regarded journalist and anchor of information programs. In 2001, Jean started her own show in Montreal, Michaelle, which was broadcast on French-language public television. The program featured a series of in-depth interviews with experts, enthusiasts and visionaries.

After her appointment, Her Excellency the Right Honourable Michaelle Jean promised to make the Office of the Governor General more meaningful to Canadian youth by demonstrating the impact it can have on their lives. As the first Black Governor General of Canada and a former refugee, Jean is striving to ensure that her office is particularly accessible and relevant to youth who experience social exclusion. Jean has committed to helping develop opportunities for young Canadians from across the country build networks of solidarity that span regional, racial, ethnic, gender, class and other differences.

Governor General Jean has won numerous honours for her professional achievements, including: the Human Rights League of Canada’s 1989 Media Award for a report titled La Pasionaria, on the struggle of an immigrant woman in Quebec; the Prix Mireille-Lanctot for a report titled Partir a zero dealing with spousal violence; the Prix Anik for the best information reporting in Canada for the investigation of the power of money in Haitian society;  the inaugural Amnesty International Journalism Award; the Galaxi Award for the best information host; the 2001 Gemini Award for best interview in any category; and the Conseil de la Langue Francaise du Quebec’s Prix Raymond-Charette.  Michaelle Jean has also been named to the Ordre des Chevaliers de La Pleiade by the Assemblee internationale des parlementaires de langue francaise, and has been made a citizen of honour by the City of Montreal and the Ministere de I’ Immigration et des relations avec les citoyens of Quebec in recognition of her accomplishments in communications.

Michaelle Jean currently lives at Rideau Hall and is married to documentary filmmaker Jean Daniel Lafond, they have an eight year old daughter.