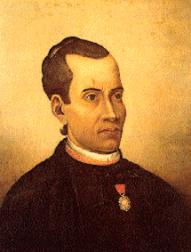 José Mauricio Nunes Garcia (1767-1830) was an Afro-Brazilian composer and organist who was the grandson of slaves. Over 240 works of music by Garcia have survived. Garcia’s mother was Vitória Maria da Cruz and his father was Apolinário Nunes Garcia, a tailor. Garcia was born in Rio de Janeiro on September 22, 1767. Salvador José de Almeida e Faria taught the youth music. A biographer, Manuel de Araújo Porto Alegre, wrote that Garcia sang beautifully, wrote music, and played the harpsichord and guitar without lessons. The biographer adds that Garcia taught music from age 12, and was educated in the Royal Classes.

Garcia wrote his earliest surviving work, “Tota pulchra Es Maria,” in 1783. He studied for the the priesthood where he collaborated with Lopes Ferreira, the chapel master. Garcia joined the brotherhood of Saint Cecilia as a music teacher in 1784. He wrote “Litany for Our Lady in 4 voices and organ.”  By 1788 he was composing anthems and acapella works for church services and two years later gained fame with his “Funeral Symphony.” Garcia was ordained as a priest in March, 1792. When the chapel master died in 1797, Garcia succeeded him.

When the Portuguese Royal Family took refuge in Brazil in March 1808, clerics who accompanied them tried to remove Garcia from his position because of his race. Garcia was then told to concentrate on composition. His works that year included the “Missa Pastoril,” the “Requiem Mass,” and the “Officium for the Dead.”

A Royal wedding in 1817 gave Garcia the opportunity to compose “12 Divertimenti” for the ceremony. In that year Garcia composed the first Brazilian opera, “Le Due Gemelle” (“The Two Twins”), which was destroyed by fire in 1825. Monteiro Neto also tells us that in December 1819 Garcia conducted the first Brazilian performance of Mozart’s “Requiem” (K 626). His last work was the “St. Cecilia’s Mass.” José Mauricio Nunes Garcia died on April 18, 1830.