Leroy Robert Paige, one of the few African American baseball athletes to play in both the Negro Baseball Leagues and in Major League Baseball. He was also the first player to be inducted into the Baseball Hall of Fame because of his career in the Negro Leagues.

Paige was born in Mobile, Alabama, on July 7, 1906, to John Paige, a gardener, and Lulu Coleman Paige, a domestic worker. He had eleven siblings. Paige earned money and a nickname as a boy by carrying suitcases or satchels at the Mobile Train Station. An indifferent student in school, young Paige was arrested two weeks before his thirteenth birthday for shoplifting. Because this was the latest in a series of truancy infractions, Page was sent to the Industrial School for Negro Children in Mount Meigs, Alabama. It was during his time in the Industrial School that Paige perfected his pitching skills.

Satchel Paige and other black players briefly integrated baseball when he was signed by Bismark, North Dakota car dealer Neil O. Churchill in 1933 to play for the semi-pro Bismarks. Churchill who had already signed catcher Quincy Trouppe, recruited from the Chicago American Giants, infielder Red Haley from the Memphis Red Sox, and pitcher Roosevelt Davis from the Pittsburgh Crawfords, brought Paige to Bismark from the Crawfords to help his team win the state baseball championship over a rival Jamestown team. Paige worked in North Dakota for one month, receiving $400 and a new late model automobile.

Paige pitched in the Negro World Series in 1942 and 1946. Paige also played ball in Cuba, Puerto Rico, and the Dominican Republic where his team, Los Dragones, was owned by Rafael Trujillo, the nation’s dictator.

Leroy Paige played his final years in baseball in the Major League. Within four months of Jackie Robinson’s debut with the Brooklyn Dodgers which ended baseball’s color line, Paige was recruited by the Cleveland Indians. He joined the club on July 9, 1948, at the age of 42. Paige helped lead the Cleveland Indians to a pennant win and a World Series appearance against the Boston Braves that year.

Satchel Paige later played for the Kansas City Athletics and the St. Louis Browns. In his career, he was celebrated by players like Joe DiMaggio and Dizzy Dean who extolled him as the greatest pitcher of all time. Paige’s skills, performance, longevity, and personality drew a record-setting crowd in 1948 in Cleveland of 72,562 to see him pitch. 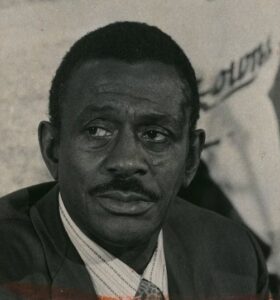 Paige’s last full season in Major League Baseball came in 1953 when he was released by the St Louis Browns. In 1965 Paige, then 59, was signed to play one game against the Boston Red Sox. The rest of this time he played with minor league teams or barnstormed across the country. Paige briefly appeared as a Buffalo Soldier in the 1957 film The Wonderful Country, starring Robert Mitchum and Julie London, and in 1968 he was an unsuccessful candidate for a seat in the Missouri State Legislature. His greatest late life honor came in 1971 when he was inducted into the Baseball Hall of Fame. Paige’s last job in baseball was in 1980 when he was named Vice-President of the Triple-A Springfield (Missouri) Cardinals.

Paige married twice. His first wife, Janet Howard, who he wed in 1934, divorced him in 1943. He married his second wife, Lahoma Brown, in 1947. The couple had seven children.