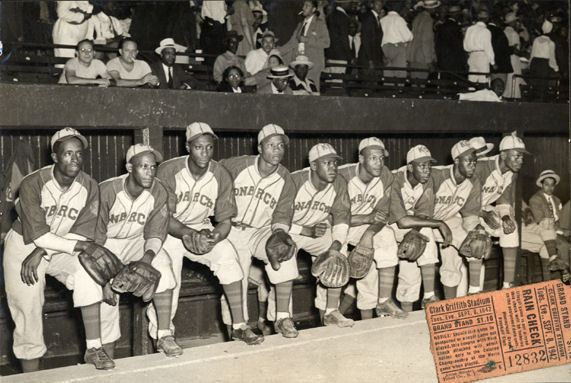 The Kansas City (Missouri) Monarchs were the most prominent baseball team to play in the Negro Leagues. Formed in 1920, they were also the longest-running team in the Leagues, disbanding in 1965. Many famous players were on the Monarchs roster, including the hall of fame pitcher Satchel Paige, and the man responsible for breaking the color barrier in major league baseball, Jackie Robinson. The Kansas City Monarchs won several championships, including the first Negro League World Series in 1924.

Formed in 1920 by owner J.L. Wilkinson, a white businessman who had formerly played baseball but who turned to team management after an injury, the Kansas City Monarchs grew out of the old All Nations barnstorming team that crisscrossed the American Midwest just before World War I.  Other players came from the 25th Infantry Wreckers, an all-black baseball team recruited into the U.S. Army primarily for their playing abilities.

The Monarchs steadily grew in popularity over the 1920s partly after Wilkinson hired veteran Cuban baseball star Jose Mendez to manage the team in 1923.  By the time of the Great Depression Wilkinson purchased a portable lighting system which was trucked from game to game.  The lighting system allowed the Monarchs and their opponents to play night games which led to greater success and notoriety for the Monarchs while boosting interest in the Negro Leagues across the nation.

In 1924 the Kansas City Monarchs took on the Eastern Colored League champions Hilldale team from Darby, Pennsylvania in the Negro League World Series. Games in the series were played in various locales including Philadelphia, Pennsylvania, Baltimore, Maryland, and Kansas City. But the final game took place in Chicago, Illinois, where the Monarchs triumphed with five runs in the ninth inning earning the title “World’s Colored Champions.”

Two of the most famous players on the team were hall of famers pitcher Satchel Paige and shortstop Jackie Robinson, a former U.S. Army lieutenant in World War II.  Paige joined the Monarchs in 1935, but his longest stint with the team was from 1939 to 1947.  In 1948 Paige left the Monarchs to join the Cleveland (Ohio) Indians following Jackie Robinson’s move to the Brooklyn (New York) Dodgers in 1947.  Although Robinson broke the Major League color barrier, Paige was a far more prominent player on the Monarchs.  In fact Robinson played only one season (1945) with the Monarchs before moving on to the Dodgers.

Following Robinson’s move to the Brooklyn Dodgers, the Monarchs would send more players into the major leagues than any other team in the Negro Leagues. In addition to Paige and Robinson, Willard Brown, Andy Cooper, Bullet Rogan, and Hilton Smith all eventually went to the Major Leagues.  They and Monarchs owner J.L. Wilkinson are also members of the National Baseball Hall of Fame. After many years of success and innovation the Kansas City Monarchs disbanded in 1965. The impact the Kansas City Monarchs had on baseball continues to be felt today.