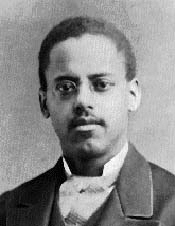 Inventor Lewis H. Latimer was born in Chelsea, Massachusetts on September 4, 1848.  His parents were former slaves who escaped bondage and settled in Boston.  Abolitionists William Lloyd Garrison and Frederick Douglass secured the necessary funds to obtain their freedom.  After a stint in the Union Navy during the Civil War, Latimer worked as an office assistant in the patent law firm of Crosby and Gould.  It was there that he taught himself drafting.  He quickly began to experiment with ideas for inventions.

In 1874 Latimer received his first patent for improving the toilet paper on passenger railroad cars.  In all, he was given eight patents.  He is popularly known as the inventor who prepared drawings for Alexander Graham Bell’s patent application for the telephone.  He eventually worked on electric lights, became superintendent of the incandescent lamp department of the United States Electric Lighting Company, and supervised the installation of light for buildings in the United States and Canada.

In 1890 Lewis Latimer published a book entitled Incandescent Lighting: A Practical Description of the Edison System.  He also served as chief draftsman for General Electric/Westinghouse Board of Patent Control when it was established in 1896.  Some of the individuals who worked with Edison formed the Edison Pioneers in 1918 to preserve memories of their early days together and to honor Edison’s genius and achievements.  Latimer was a founding member of this group and he was the only African American among them.  He died in Flushing, New York, on December 11, 1928 at the age of 80.