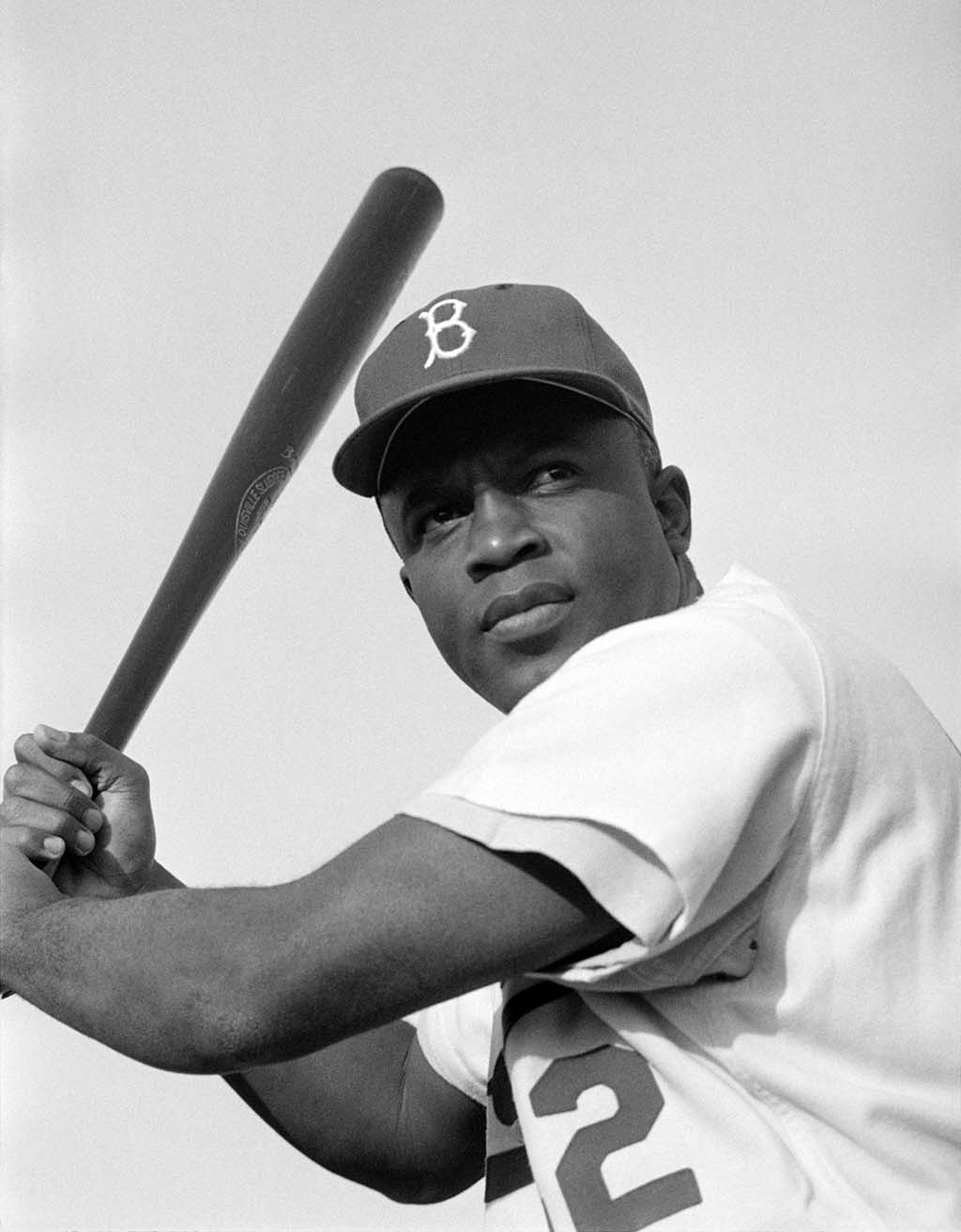 When Jack Roosevelt (Jackie) Robinson took the field on April 15, 1947 wearing a Brooklyn Dodgers uniform, he became the first African American in over fifty years to play on a major league baseball team. In the process, he broke through baseball’s color line that had relegated African American players to the segregated Negro Leagues.

Jack Roosevelt Robinson, the youngest of five children, was born in Cairo, Georgia on January 31, 1919 to sharecroppers Jerry and Mallie Robinson. When Jack was a year old his father deserted the family, and Mallie Robinson relocated her family to Pasadena, California where Jack grew up. Robinson’s athletic ability was apparent from an early age. In high school he participated in five sports: basketball, football, baseball, tennis and track. He continued to play multiple sports at Pasadena Junior College, where he graduated in 1939, and then at the University of Southern California, Los Angeles (UCLA).

While at UCLA, Robinson became the first athlete to earn varsity letters in four sports. Despite his athletic accomplishments, Robinson believed that his chances of playing on any major league sports team after graduation were slim, given the racism of the era, and in 1941 he left college just shy of graduation to take a job as an assistant athletic director with the National Youth Administration in Atascadero, California. The position, however, was short-lived as government funding for the job ended the following year.

In 1942, Robinson was drafted into a segregated Army unit where he served two years.  He was admitted into Officer Candidate School and became a second lieutenant in 1943, although his service was marred when he was court-martialed for refusing a civilian bus driver’s order to move to the “back of the bus” during a trip back to the base. After a brief trial, he received an honorable discharge in 1944. The incident was played out in a 1990 movie, The Court-Martial of Jackie Robinson.

Robinson then joined the Kansas City Monarchs, a Negro League team. In August of 1944 Robinson was still with the Monarchs when Branch Rickey approached him about playing for the Dodger’s organization. Robinson spent the 1946 season with the Dodger’s farm team, the Montreal Royals. Also that year he married his college sweetheart, Rachel Isum. The couple had three children, Jackie Jr. (1946), Sharon (1950), and David (1952).

In 1947 Robinson took the field for the Brooklyn Dodgers becoming the first African American in the 20th century to play for a major league baseball team. At the end of his first season with the Dodgers, Robinson was named National League Rookie of the year.  He had 12 home runs, a league-leading 29 steals, and a .297 batting average. In 1949 Robinson was selected as the National League’s Most Valuable Player (MVP). He also won the batting title with a .342 average.

In ten seasons with the Dodgers, Robinson played in six World Series games including the Dodgers’ 1955 World Championship. He played in six consecutive All-Star Games, from 1949 to 1954, and retired at the end of the 1956 season. In 1962, his first year of eligibility, Robinson was inducted in the National Baseball Hall of Fame.

In retirement, Robinson was an active participant in the struggle for civil rights, working with Dr. Martin Luther King Jr. and with the National Association for the Advancement of Colored People (NAACP). He also wrote for The New York Post and The Amsterdam News.

Jackie Robinson died of a heart attack on October 24, 1972 at his home in Stamford, Connecticut. He was 53. On March 26, 1984, Robinson was posthumously awarded the nation’s highest civilian honor, the Medal of Freedom, by President Ronald Reagan. In 1996 the U.S. Congress and President Clinton authorized a coin to commemorate the fiftieth anniversary of Robinson’s 1947 entry into major league baseball. In 1997 the U.S. Post Office issued a stamp in his honor, and on the 50th anniversary of the date that Robinson broke major league baseball’s color barrier, Major League Baseball retired Robinson’s number 42.