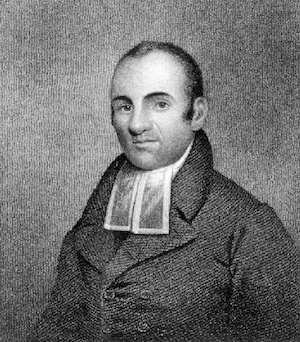 Lemuel Haynes was a Patriot involved in the American Revolutionary War, a prominent New England Congregational minister, and the first African American in America to receive an honorary college degree.

Haynes was born in West Hartford, Connecticut on July 18, 1753. His mother was a Scottish immigrant indentured servant and his father was an enslaved African American who lived and served on the plantation of John Haynes. When both his parents abandoned him, Haynes, an unwanted infant was assigned as an indentured servant to the household of Deacon David Rose of Granville, Massachusetts until his 21st birthday. He spent his days working the farm, and his nights attending the plantation schools. A household Saturday evening custom was to read sermons from the local church, and on one such evening Haynes read a rousing sermon.  When he was asked whom was the author, he acknowledged that it was his own work. From that point Haynes was frequently called upon to write, proofread, and preach sermons.

Upon reaching the age of twenty-one, Haynes was freed from his indenture, built a stone home in Granville, and enlisted in the local farmers’ militia called the Minutemen. Haynes, a private, was assigned to the command of Captain Lebbeus Ball on April 20, 1775, one day after the skirmish at Lexington and Concord.  He and fellow militiamen joined other Patriots at the siege of Boston, Haynes later became one of three African American men assigned to Ethan Allen’s famed Green Mountain Boys.

After the war, Haynes returned to his farming duties at Granville, Massachusetts while continuing to train in Theology. He studied Latin with the Rev. Daniel Farrand in New Canaan, Connecticut and then Greek with Rev. William Bradford in Bloomfield (then Wintonbury), Connecticut. In November of 1780, Haynes was licensed to preach and accepted a call at the Congregational Church of Middle Granville, making him the first African American minister of an all-white congregation.

In 1785, he became the first ordained African American minister. After a courtship with Elizabeth Babbitt, white school teacher, the couple married and had ten children, Haynes remained in Granville until 1787, when he accepted a call at the West Parish congregation in Rutland, Vermont where he remained for the next thirty-one years.  In 1818, however, he was dismissed from his Rutland parish due to this Federalist politics and criticism of the War of 1812.

During his years at Rutland, Haynes developed a reputation for evangelical Calvinist fervor and staunch opposition to slavery and oppression. His dynamic sermons and essays which stressed interracial benevolence, liberty, natural rights, and justice were distributed in newspapers internationally, making him one of the first African Americans to be published. He also received an honorary Master of Arts degree from Middlebury College at its second commencement in 1804, only the fourth degree given by the school and the first ever to an African American.

Rev. Lemuel Haynes passed away at the age of 80 on September 28th, 1833. In 1975 his home in South Granville, New York was designated a National Historic Landmark. As of 2009 the home is a private residence.