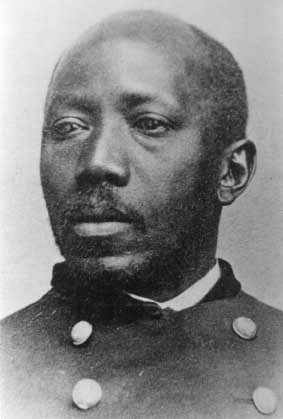 Delany was born in Charles Town, Virginia (now West Virginia) to a slave father and a free mother.  Delany’s mother took her children to Pennsylvania in 1822 to avoid their enslavement and persecution brought on by attempting to teach her children to read and write, which was illegal in the state at that time. In 1833 Martin Delany began an apprenticeship with a Pittsburgh physician and soon opened a successful medical practice in cupping and leeching (it was not necessary to be certified to practice medicine prior to 1850).  In 1843 he began publishing a newspaper in Pittsburgh called The Mystery. Later Delany joined Frederick Douglass to produce and promote The North Star in Rochester, New York.

Martin R. Delany entered Harvard Medical School in 1850 to finish his formal medical education (along with two other black students) but was dismissed from the institution after only three weeks as a result of petitions to the school from white students.  Two years later he published The Condition, Elevation, Emigration, and Destiny of the Colored People of the United States, Politically Considered, claiming that even abolitionists would never accept blacks as equals and thus the solution to the black condition lay in the emigration of all African Americans back to Africa.  In 1859 Delany led an emigration commission to West Africa to explore possible sites for a new black nation along the Niger River, “We are a nation within a nation, we must go from our oppressors,” he wrote.

When the Civil War began in 1861 Delany returned to the United States.  Jettisoning for a time his emigrationist views, Delany recruited thousands of men for the Union Army.  In February 1865, after meeting with President Abraham Lincoln to persuade the administration to create an all-black Corps led by African American officers, Delaney was commissioned a major in the 52nd U.S. Colored Troops Regiment.  With that appointment, he became the first line officer in U.S. Army history.

When Reconstruction began, Delany was assigned to the Freedman’s Bureau in South Carolina.  There he called for black pride, the enforcement of black civil rights and land for the freedpeople. Delany became active in local Republican politics, losing a close election for Lieutenant Governor of South Carolina but later serving briefly as a judge in Charleston, South Carolina.  As the Republicans lost power in the state Delany renewed his calls for emigration, becoming an official in the Liberian Exodus Joint Stock Steamship Company in 1878.  He also wrote in 1879 The Principia of Ethnology, a book that argued for race pride and purity.

In 1880 Delany withdrew from the Liberian Exodus Company and moved first to Boston, Massachusetts and then to Wilberforce College in Xenia, Ohio.  Martin R. Delany, considered my many as the “father of black nationalism,” died in Xenia, Ohio on January 12, 1885.