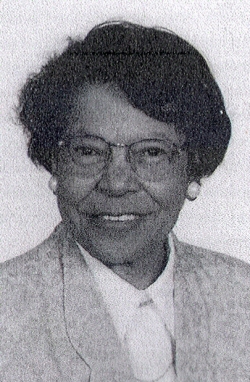 Dolores Cooper was the first African American woman in the U.S. to earn a Ph.D. in pharmacology.   She was also the first African American to earn a Ph.D. from Purdue University.  Cooper was born in 1930 in Clarksdale, Mississippi to a successful family of professionals.  Her parents responded to her expressed interest in science at a young age by purchasing chemistry sets. Later she was inspired to become a pharmacist because the segregated Clarksdale black community lacked a pharmacy.

Cooper attended an out-of-town private Presbyterian school in order to take the chemistry classes she needed to earn an advanced degree in science.  After high school she earned a B.S. in pharmacy in 1951 from Xavier University in New Orleans.  Having been accepted into eight graduate schools, Cooper chose to continue her studies at Purdue University.  After earning her Ph.D. in pharmacology in 1955, Cooper received a Fulbright Fellowship to the Pharmacology Institute in Copenhagen which allowed her to hone her research skills.

Dolores Cooper returned to the U.S. after that two year fellowship and began her career in research and teaching as an assistant professor at Meharry Medical College in Nashville, Tennessee.  Cooper was also a visiting professor at Einstein College of Medicine in New York from 1959 to 1962. Cooper married William Shockley, a microbiologist, and the two raised four children.  Shockley balanced her demanding research and teaching schedule with her family life and earned a promotion to full professor.  In 1988, Dolores Cooper Shockley was appointed chair of the Department of Pharmacology at Meharry, making her the first black woman to chair a pharmacology department in the U.S.

Dr. Shockley’s research has focused on chemical compounds which could be used to treat stimulant dependency and overdose.  She has also conducted research on how the brain responds to cocaine.