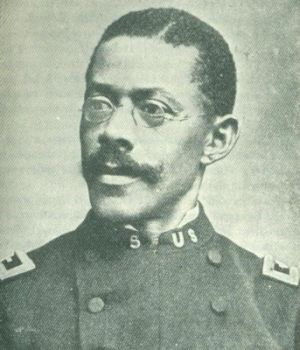 George Prioleau was chaplain of the 9th Cavalry of Buffalo Soldiers in the late 19th century. After witnessing inequality and mistreatment of his men, he publicly challenged the hypocrisy and racial line being drawn against black soldiers.

Born in 1856 to slave parents in Charleston, South Carolina, Prioleau earned his theology degree from Wilberforce University in Ohio. He was a teacher and served as an A. M. E. pastor and denominational leader for Ohio congregations, and in 1889 he became professor of theology and homiletics at Wilberforce. Six years later, President Grover Cleveland appointed him to replace Henry Plummer as chaplain of the 9th Cavalry, U. S. Army, with a rank of captain.

In 1898 upon the outbreak of the Spanish-American war, the 9th Cavalry left the western United States for the first time in its history and was deployed to bases in Georgia and Florida for military activities in Cuba and the Caribbean.  Chaplain Prioleau was eager for an opportunity for African American soldiers to prove themselves on the field of battle, but he became ill with malaria and was unable to travel to Cuba with the rest of the 9th. Upon recovering from his illness, he served as a recruitment officer in the segregated South. While there, Prioleau was shocked by the racism the 9th faced on a daily basis.

Through public letters and editorials, Prioleau challenged racial segregation and attacked the hypocrisy of fighting a war for liberation in Cuba while the United States remained locked in a mindset of racism. When the 9th returned from the Spanish-American war, they were cheered and treated as war heroes in New York City, but in Missouri the 9th Cavalry was “unkindly and sneeringly received,” as recorded by Prioleau. They also found that they were unable to sit at numerous restaurants, while white soldiers were warmly greeted and allowed to eat free of charge.

Chaplain Prioleau vocally advocated that service in the United States Army provided a rare opportunity for young black men. However, in the end he concluded that patriotic duty and military service would not erase the color line in the minds of many whites. He served in the 9th Cavalry for 20 years before being transferred to the 10th Cavalry and later the 25th Cavalry with a promotion to major, retiring in 1920. A year later, he helped found the Bethel A. M. E. Church in Los Angeles where he often preached without pay. He died in 1927 after falling from a ladder while painting the church.