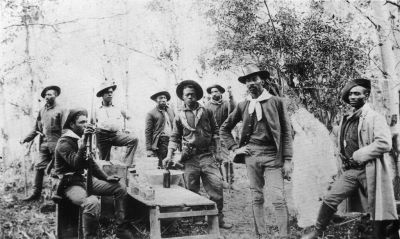 Between 1866 and 1917, African American soldiers served throughout the western United States, including the territory and later state of Montana. Beginning in 1888, the 24th and 25th Infantries and the 9th and 10th Cavalries would be stationed throughout Montana at Fort Missoula, Fort Keogh, and Fort Assiniboine where the legendary General John “Black Jack” Pershing (1860-1948) would have one of his first commands leading Buffalo Soldiers.

The primary responsibility of the black soldiers stationed in Montana was to protect the settlers from the actions of hostile Amerindians. While there were no Buffalo Soldiers involved in the Montana Territory’s most famous conflict, the Battle of the Little Bighorn (1876), they took part in less well-known actions.

In 1896, General Pershing led a unit of the 10th Cavalry on a mission to round up Cree Indians over the space of 600 miles and deport them to Canada. Montana-based soldiers also were involved in policing the labor disputes in the Coeur d’Alene mining district of northern Idaho. In 1892, when a labor dispute in the region turned violent, the 25th Infantry was deployed to impose martial law to prevent bloodshed between the strikers and the company-hired strike breakers. Soldiers stationed in Montana also took on less traditional assignments. The 25th Infantry Bicycle Corp, based at Fort Missoula, was formed in 1896 by order of Major General Nelson Miles (1839-1892) to test the combat viability of bicycle-mounted infantry.

There was racial tension between the black soldiers stationed in Montanan forts and the predominantly white citizens of the territory and later state, as there was in all places that Buffalo Soldiers were stationed. However, there were also numerous examples of good will between the two groups. In 1897, as the 25th Infantry Bicycle Corp rode through the state, they were escorted into Big Timber by enthusiastic members of the local bicycle club. The soldiers of the 24th and 25th Infantries stationed at Fort Missoula had a particularly congenial relationship with the citizens of Missoula. Local clergy were often employed for weddings, funerals, and the like for the soldiers. When the 25th Infantry was redeployed for service in the Spanish-American War, the townspeople postponed their Easter services and turned out en masse to see the soldiers off.