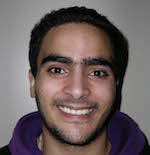 Ayman Tarek Elkholy was born on November 22, 1994 in Alexandria, Egypt where both of his parents were born and raised. Shortly after his birth, about a month, he moved to Dubai, U.A.E with his family where he spent his first 13 years. Although he grew up away from home, he visited Egypt with his family each summer on a regular basis which allowed him to stay in touch with his roots and culture. In addition, Dubai’s widely diverse and international dynamic not only made him aware and accepting of other cultures but also allowed him to fluently speak English as a 2nd language. At the age of 13, he returned to Egypt where he completed his secondary education in Cairo, during that time the Egyptian Revolution erupted which was just as rewarding and fulfilling as it was tragic. Finally, after graduating from high school he moved to the United States and specifically to Seattle, Washington where he is currently an undergraduate student at the University of Washington majoring in Business Finance.

Ayuba Suleiman Diallo is best known for his memoirs as a Muslim who had to endure the Atlantic slave trade and enslavement in colonial America. His personal history was published in 1734 by Thomas Bluett as Some Memories of the Life of Job. To this … END_OF_DOCUMENT_TOKEN_TO_BE_REPLACED

“Image Ownership: Kaori Tachibana/The Collegian” Dr. Ronald Andrew Crutcher is a distinguished classical musician and a national leader in higher education. He served as the as the seventh president of Wheaton College from 2004 to 2014, and then became the first African American president of … END_OF_DOCUMENT_TOKEN_TO_BE_REPLACED

“Image Ownership: Public Domain” James Apostle Fields was a former enslaved person who became an influential black lawyer and teacher serving in the Virginia House of Delegates from 1890 to 1891. Although sources differ on the exact date in 1844 on which Fields was born, … END_OF_DOCUMENT_TOKEN_TO_BE_REPLACED

The island of Zanzibar, now a part of Tanzania, was a nineteenth century East African trading empire that fell under the domination of the British who controlled it until the mid-twentieth century. Zanzibar is the leading producer of cloves in the world, which earned it … END_OF_DOCUMENT_TOKEN_TO_BE_REPLACED

The Almoravids, or al-Murabitun as they called themselves, were an Islamic Berber dynasty that established an empire in Morocco and eventually took it over a wide region of Northwest Africa including modern Morocco, Western Sahara, Mauritania, and part of Algeria.  The emprire stretched as far south … END_OF_DOCUMENT_TOKEN_TO_BE_REPLACED

Gamal Abdel-Nasser, the second president of Egypt, was officially appointed on June 23, 1956, and served until his death on September 28, 1970. Before becoming president, Abdel-Nasser was an Egyptian nationalist and prime minister. The first son of Fahima and Hussein Abdel-Nasser, Gamal was born … END_OF_DOCUMENT_TOKEN_TO_BE_REPLACED