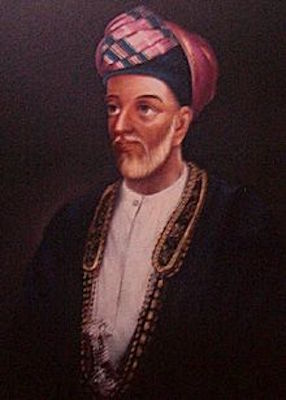 Seyyid Said, also known as Said bin Sultan, was a resourceful and energetic sultan of Oman who moved the capital from Arabia to Zanzibar in order to initiate clove production and also greatly expanded the East African slave trade. Said’s father, Sultan bin Ahmad (?–1804), ruled Oman from 1792 to 1804 when he died on an expedition. His mother was Sayyida Ghanneyeh bint Saif Al-Busaidi (1774–1866).

Prior to Sultan bin Ahmad’s death, he appointed Mohammed bin Nasir as the regent and guardian of his two sons, Salim and Said ibn Sultan. Sultan’s brother Qais bin Ahmad, ruler of Sohar at the time, attempted to seize power but was forced to retire to Sohar after a series of battles with Qais and his ally Badr bin Saif who had become the de facto ruler of Oman.

In March 1807, Said bin Sultan lured Badr bin Saif to Barka where Said was governor and killed him to become the ruler of Oman. Said became the sole ruler of Oman with consent from his brother, Salim, a decision that their aunt allegedly influenced.

After his unsuccessful attempts to expand his power within the Arabian Peninsula, and as well as economic decline in Oman, Said agreed to a treaty with Britain in 1823 that forbade slave trading in the Persian Gulf between Said’s Muslim subjects and any Christian power. In 1835 under favorable terms, Said also ratified a bilateral treaty of amity and commerce with the United States which was first negotiated at Muscat in 1833 by Special Agent Edmund Roberts.

The treaty, however, did not exclude slave trading on the East Coast of Africa. Said invaded and conquered Mombasa in what is now Kenya in 1837. After that victory, Said moved the capital of his empire from Muscat, Oman, to the island of Stone Town, Zanzibar, in 1840, making him the first Sultan of Oman and Zanzibar. Although Said never entirely abandoned Oman, the shift in capitals made Oman a distant province rather than the heart of his realm; he was now considered an east African ruler with Arabian possessions.

Said recognized Zanzibar’s suitable climate and soil for the cultivation of cloves, an essential meat preservative used in Europe prior to the invention of refrigerators. He also sought slaves as cheap labor to attend to the large-scale cultivation that he initiated. The high demand of slaves attracted East Indians who provided financing for most of the slave trade at Zanzibar. Said functioned as a liaison between the Indian capital and the Arab caravans and plantations.

Said brought renewed prosperity to Oman and Zanzibar through these plantations and Arab-Indian alliance until his death in 1856. After his death, the alliance deteriorated due to British interference, succession disputes, and political arguments. Following Said’s death, his realm was divided: his third son, Thuwaini bin Said, became Sultan of Muscat and Oman while his sixth son, Sayyid Majid bin Said, became the Sultan of Zanzibar.