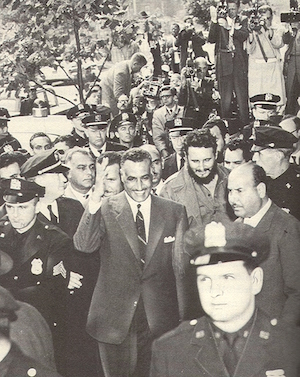 Gamal Abdel-Nasser, the second president of Egypt, was officially appointed on June 23, 1956, and served until his death on September 28, 1970. Before becoming president, Abdel-Nasser was an Egyptian nationalist and prime minister.

The first son of Fahima and Hussein Abdel-Nasser, Gamal was born on January 15, 1918, in a small district in Alexandria, Egypt, called Bakos. His father Hussein was a postal worker while his mother, Fahima, remained at home and took care of their children.  The couple married in 1917, soon after Gamal was born (1918) and later was followed by his two brothers, Izz al-Arab and al-Leithi.

Abdel-Nasser’s family moved around Egypt in his early years due to his father’s occupation; Nasser attended a nursery school in Alexandria until they moved to Asyut in 1921 then Khatatba in 1923, where he started elementary school, followed by Cairo in 1924 and finally back to Alexandria in 1928 to complete his primary education. After attending a boarding school in Helwan for a year, he returned to Alexandria where, only twelve years old at the time, he participated in his first demonstration: an anti-government protest organized by the Masr El-Fatah Society, a group of religious nationalists who aimed to unite the Arab nations into a single nation for Islam. Police officers suppressed the demonstration during which Abdel-Nasser was injured and arrested.

In 1933, Abdel-Nasser started pursuing his political career and became head of El-Nahda secondary school’s student union. On November 13, 1935, four days after Britain’s refusal to re-install the Egyptian constitution, Abdel-Nasser led a student demonstration, where he was injured again. Although the constitution was restored shortly after that demonstration, Abdel-Nasser’s political activity increased following a 1936 treaty which increased British power over Egypt. Abdel-Nasser’s political activity led to his temporary expulsion from the school, but the principal was pressured to overturn the decision when other students went on a strike.

Abdel-Nasser joined the Egyptian National Military Academy in 1937 and graduated as corporal only seventeen months later in 1938. While he served in the military, Abdel-Nasser helped organize the Free Officers Movement, a group of young nationalist soldiers who shared his frustration with Egypt’s political position. Many of these soldiers took part in the 1948 Arab-Israeli War. Along with the Free Officers, he began recruitment for a revolution against the Egyptian monarchy and secretly distributed brochures that demanded the reorganization of the army and political reforms that would improve the lives of impoverished Egyptians. Although he had planned to lead a revolution against the monarchy in 1955, Abdel-Nasser decided to initiate it on July 23, 1952, when he realized the support he had in the army. Three days after the revolution began, King Farouk was forced into exile, and Abdel-Nasser was re-elected as president of the Freedom Officers. On June 18, 1953, the monarchy was abolished and the Revolutionary Council (RC), the temporary political leadership in Egypt, announced that the prime minister at the time, Mohammed Naguib, would become the first president of the Arab Republic of Egypt.

Abdel-Nasser, then vice chairman of the Revolutionary Council was named prime minister on April 17, 1954. When a member of the Muslim Brotherhood attempted unsuccessfully to assassinate Abdel-Nasser during an October 26, 1954 speech, and the attempt was traced back to President Naguib, he was removed from office and Abdel-Nasser replaced him. On June 23, 1956, Abdel-Nasser was elected president and served until his death on September 28, 1970, at the age of 52.