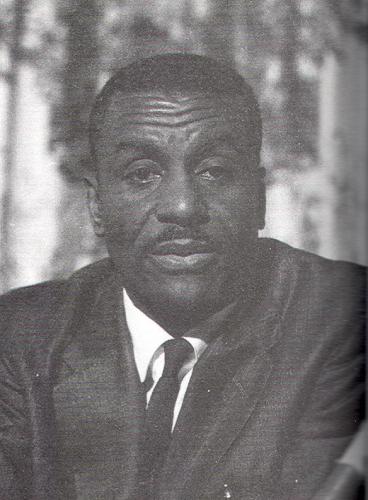 Image Courtesy of the Library of Congress

Reverend Fred Shuttlesworth was born on March 18, 1922 in Mount Meigs, Alabama to Vetta Green and Alberta Robinson.  However, his mother and stepfather, William Nathan Shuttlesworth, a farmer in Oxmore, Alabama raised Fred Shuttlesworth.  Shuttlesworth attended Oxmore Elementary School.  He graduated from Rosedale High School in 1940 and the following year he married Ruby Keeler, a nurse.  In 1943 he became a truck driver and studied mechanics in Mobile. While in Mobile, Shuttlesworth also attended seminary at Cedar Grove Academy.  In 1945, he delivered his first sermon. He pursued an A.B. degree at Selma University and Alabama State College. In 1950, Shuttlesworth became pastor of First Baptist Church in Selma, and in 1953, he returned to Birmingham as pastor of Bethel Baptist Church.

In Birmingham Shuttlesworth became a leading civil rights figure, challenging segregation in the school system and Jim Crow policies in public accommodations. In May of 1956 Reverend Shuttlesworth formed the civil rights organization Alabama Christian Movement for Human Rights. That same year he became a participant in the Montgomery Improvement Association’s Montgomery Bus Boycott.  Shuttlesworth’s role in the boycott angered members of the Ku Klux Klan who dynamited his house.

Following the destruction of his home, Shuttlesworth continued to civil rights crusade.  In 1957 police brutally beat and hospitalized him for attempting to enroll his daughter in an all white school.  In the late 1950s Shuttlesworth continued as a leader in the black freedom struggle by co-founding the Southern Christian Leadership Conference in 1957 with Dr. Martin Luther King, Jr. and Bayard Rustin.

Shuttlesworth activism intensified in the early 1960s.   He joined younger activists in sit-ins to desegregated lunch counters and he assisted the Congress of Racial Equality in organizing freedom rides throughout the South.

Shuttlesworth continued to challenge Jim Crow in Birmingham. In 1963 he participated in a civil rights campaign in that city’s Kelley Ingram Park.At one such protest Sheriff Eugene “Bull” Conner ordered the fire department to turn water cannons on Shuttlesworth and the other protester. The reverend was seriously injured and hospitalized.

Rev. Fred Shuttlesworth returned to Birmingham where he died on October 5, 2011.  He was 89.