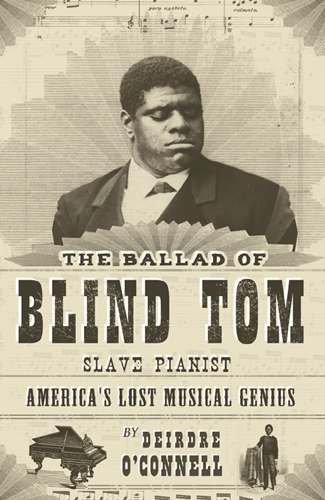 Hear a soundtrack specially chosen to enhance your learning about Confounded: The Enigma of “Blind Tom” Wiggins

“I am astounded. I cannot account for it, no one can. No one understands it,” a St Louis man uttered after watching Blind Tom perform in concert in 1866. His mystification was by no means isolated. Few other performers on the nineteenth century stage aroused as much curiosity as “Blind Tom” Wiggins. Born a slave in Georgia in 1848, by the time he died Hoboken, New Jersey, in 1908, he was an international celebrity and his name was a byword for inexplicable genius.

From an early age, it was clear that Blind Tom possessed extraordinary musical gifts. He could imitate, either vocally or musically, any sound he heard. This, coupled with an encyclopedic memory and all-encompassing passion for music, meant that by the age of sixteen, he hovered somewhere between a respected concert pianist and glorified sideshow freak. For the following forty years, he toured the length and breadth of North America, soaking up the sounds of the Civil War and Gilded Age, then baffling audiences with his astonishing gifts.

During the tumultuous election campaign of 1860, for instance, he was taken to a political rally in support of Democratic presidential candidate Senator Stephen Douglas of Illinois. Tom heard his speech and years after he would deliver this oration, capturing not only the senator’s distinctive boom and mannerisms, but the crowd’s heckles and cheers. Somehow he could recall the sensory snapshot of that moment with sparkling precision.

One of his music teachers described how Tom, now a man in his thirties, learned Beethoven’s 3rd Concerto to perfection in the space of an afternoon. He then stunned her by capping off the lesson by turning his back to the piano and playing the bass with his right hand and the treble with his left hand. Somehow Tom could separate the treble from the bass as if they were detached, self-contained streams that were independent of one another.

Tom’s gravity-defying acrobatics were also cause for much bewildered comment. He would routinely stand on one foot, his body bent forward and his back leg raised to form a “T.” Then he would leap. “It makes one giddy to see him make these circuits,” noted one man, “he comes six inches of the wall but never hits it.” Eccentric, ebullient, and hugely entertaining, nineteenth century audiences did not know what to make of Tom but one thing was certain: the American stage had never seen anyone like him.

Yet today this remarkable pianist is virtually forgotten. His story comes as a surprise to many who consider themselves well versed in African American history. “How is it I’ve never heard of him before?” is a question often put to me.

The answer, I suspect, is that for all his genius, Blind Tom falls short on what an African American hero should be. After emancipation, he remained loyal to his master, electing to remain with him. Even at the height of his career, black newspaper editors kept him at arm’s length, thinking him a buffoon who perpetuated negative stereotypes about the black race. Most damning of all, his most famous composition, The Battle of Manassas, tells the story of the great Confederate victory at Bull Run in April 1861. With a track record like this, little wonder some condemned Blind Tom to the ranks of Uncle Tom.

But was Blind Tom really a Confederate stooge or, like the St Louis man, was there something about him that American society did not understand? Drawing from the wealth of scientific research over the last fifty years, it is highly likely that “Blind Tom” Wiggins was a savant, most likely an autistic one. His brain was wired in a profoundly different way than most people.

Thanks to the insights offered by high profile savants like artist Stephen Wiltshire, poet Tito Mukhopadhyay, scientist Temple Grandin, and “brainman” Daniel Tammet, we can now envisage what it is like to experience the world in rich sensory detail, unfiltered by cultural constructs like politics and social conventions. We can start to imagine experiencing numbers as colors, memory as photographs, music as ecstasy, and information in disconnected fragments.

When Blind Tom was alive in the late nineteenth century, his extraordinary powers and bizarre behavior were viewed exclusively through the prism of race or the supernatural. Spiritualists thought him a medium channeling the music of the great masters, while Social Darwinists, obsessed with race hierarchies, insisted that his compulsive urge to move and “natural” musicality, indeed everything about him, were intrinsic expressions of his “African-ness.”

Both views ultimately denied him his humanity and this is what I most wanted to restore when I set upon writing The Ballad of Blind Tom. I wanted people to understand why he could perfectly replicate Senator Douglas’s speech, yet not comprehend the meaning of the words he was uttering. Explain why he, a slave, was so indifferent in his own bondage and emancipation; reveal the depth of his passion for music; glimpse the bliss he felt while playing; and hear The Battle of Manassas not as the piece of political propaganda but a journey into the maelstrom of battle.

Blind Tom existed in two worlds: the brutally racist world he lived in had little bearing on the symphony inside his head. It was a situation ripe for manipulation. Tom’s loyalty could be secured with little more than a quality piano and morsels of food. Guileless, gullible, and prone to anxiety, he accepted without question the lies his extravagantly wealthy masters and manager were feeding him: that other people were “strangers” who were out to do him harm; that if he did not relentlessly tour, he would never hear the buzz of an adoring public again (the fact he was routinely called an “idiot” was skillfully masked from him).

Yet, when it came to music, Tom was uncompromising. The world he perceived was alive with vibration, which he gave voice to with unflagging zeal.

Mark Twain witnessed this, by chance, on a train. For three unbroken hours he watched Tom howl along to the hiss, clack, and whistle of a locomotive. “What a wild state he was in! Blowing off gauge cocks, ringing his bell, thundering over bridges with a row and a racket like everything going to pieces, whooping through tunnels, running over cows. Heavens! I thought, will this devil never run his viewless express off the track and give us a rest?”

A Washington doyenne felt the same wistful admiration when she saw Tom dance through a rose garden one full mooned summer’s night. He then tumbled back to the piano to play something that the stars told him. Opening with a prelude of exquisite chords, “he suddenly burst into such brilliant, such wildly gay, at one moment, and at the next such heart-breaking melodies as never heard below the stars.”

For me, these are the abiding images of Tom. Not of a man who was manipulated and scorned, but an engaged and passionate soul who had a deep and joyful empathy with the sensory world. In relaying it to the world, he reminded a generation of Americans of the complexity of the human condition.