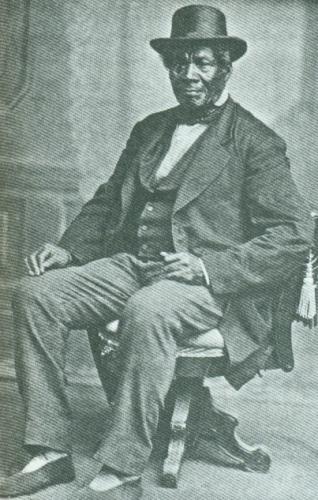 George Bonga was a 19th century fur trader of black and Native American heritage.  He lived along the shores of Lake Superior, one of the Midwestern Great Lakes. Fluent in French, English, and Native American languages, Bonga served as an interpreter during Indian-U.S. negotiations and worked for the American Fur Company before establishing his own trading post.

Bonga was born on August 20, 1802 near the present-day city of Duluth, Minnesota. His grandparents were Marie Jeanne and Jean Bonga, who as slaves lived at the prominent fur trading depot of Fort Michilimackinac in the northern Michigan territory. George’s father Pierre Bonga travelled to Minnesota as a fur trader and married Ogibwayquay of the Native American Ojibwe nation.  Bonga was educated in Montreal, Canada and returned to Minnesota to carry on the family business along with his two brothers.

In 1820, Bonga used his language fluency to serve as interpreter for Lewis Cass, Governor of Michigan Territory, at a treaty council held in Fond du Lac territory with the Ojibwe. In 1868, he again served as interpreter for Indian agent Joel Bean Bassett in negotiations with the Mississippi Band of Ojibwe at White Earth in Minnesota.  And in 1837, he tracked suspected murderer Che-ga-wa-skung for six days and brought him to Fort Snelling for trial.

With residences in Minnesota’s Lac Platte, Otter Tail, and Leech Lake, Bonga was quite prosperous and a lavish host, as recounted in the memoirs of Judge Charles Flandreau after an extended visit in 1858.  It is believed that Bonga was the first African American born in Minnesota, although he often referred to himself as one of the first white men in the region.

Bonga married twice, first to Nahgahnashequay then to Baybahmausheak Ashwewin, both from the Ojibwe nation.  He had five children: Peter, William, Jack, Susan, and George.