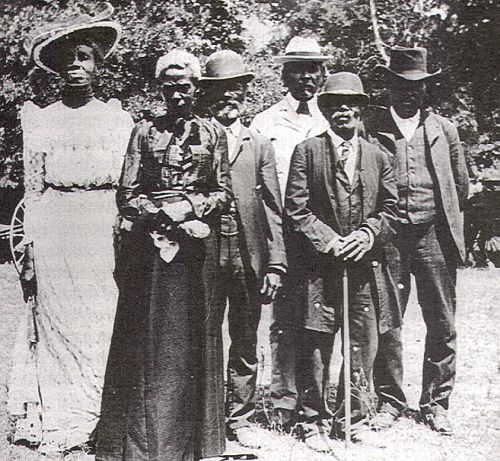 In the article below, historian Quintard Taylor describes the origins and evolution of the Juneteenth holiday sine 1865.

Any bright high schooler or Constitutional law expert would say that African Americans were formally liberated when the Georgia legislature ratified the 13th Amendment on December 6, 1865, guaranteeing its addition to the U.S. Constitution.  Yet freedom came in varied ways to the four million enslaved African Americans long before the end of the Civil War.  Some fortunate black women and men were emancipated as early as 1861 when Union forces captured outlying areas of the Confederacy such as the Sea Islands of South Carolina, the Tidewater area of Virginia (Hampton and Norfolk) or when enslaved people escaped from Missouri, Indian Territory, and Arkansas into Kansas.  Other black slaves emancipated themselves by exploiting the disruption of war to run away to freedom, which in some instances was as close as the nearest Union Army camp.  President Abraham Lincoln’s Emancipation Proclamation liberated all African Americans residing in territory captured from the Confederates after January 1, 1863.  These slaves did not have to run for their freedom, they merely had to wait for the arrival of Federal troops.

Emancipation for still more African Americans came in April 1865 when Confederate commander Robert E. Lee surrendered his army to Federal forces at Appomattox Court House in Virginia.   With that surrender the rebellion was over.  News of Lee’s surrender spread within days through the former slave states east of the Mississippi River.  With that news came the realization by both the former slaves and former slaveowners that freedom would now be the permanent status for African Americans.

Texas, however, was another matter.  Isolated from both Union and Confederate forces during the Civil War and thus spared horrific battles on its soil, Texas has become a place of refuge for slaveholders seeking to insure that their “property” would not hear of freedom.  Through April, May, and part of June, 1865, they did not.

Finally on June 19, 1865, freedom officially arrived in Texas.  One day before, on June 18, Union General Gordon Granger and 2,000 federal troops landed on the beach at Galveston to take control of the last unoccupied Confederate state.   The following day on June 19, Granger read the contents of General Order No. 3 from the balcony of Ashton Villa in Galveston.   His proclamation announced in part:

“The People of Texas are informed that, in accordance with a proclamation from the Executive of the United States, all slaves are free.  This involves an absolute equality of personal rights and property rights between former masters and slaves, and the connection heretofore existing between them becomes that between employer and hired labor.   The freedmen are advised to remain quietly at their present homes and work for wages.

Word of emancipation gradually spread over the vast state despite the efforts of some slaveholders to maintain slavery.  African Americans, however, would not be denied the liberty that had eluded them so long.  When the news came entire plantations were deserted.  Many blacks brought from Arkansas, Louisiana, and Missouri during the War returned home while Texas freedpersons headed for Galveston, Austin, Houston, and other cities where Federal troops were stationed.

The freedpeople created a number of poems that reflected their new status including the following:

Emancipation news often arrived with Union troops who fanned out across Texas.  Felix Haywood, a North Carolina-born Texan, recalled the summer day in 1865 when he heard of his emancipation while working on a cattle ranch near San Antonio:

“Soldiers, all of a sudden, was everywhere–coming in bunches, crossing and walking and riding.  Everyone was a-singing.  We was all walking on golden clouds. Hallelujah!….Nobody took our homes away, but right off colored folks started on the move.  They seemed to want to get closer to freedom, so they’d know what it was  like it was a place or a city.”

Even in his celebration Haywood also mused on the meaning of that freedom.

“We knowed freedom was on us but we didn’t know what was to come with it.  We thought we was going to get rich like the white folks.  We thought we was going to be richer than the white folks, ’cause we was stronger and knowed how to work, and the whites didn’t, and they didn’t have us to work for them any more.  But it didn’t turn out that way.  We soon found out that freedom could make folks proud, but it didn’t make ’em rich.”

Although news of emancipation came at different times during that Texas summer and autumn 1865, local blacks gradually settled on June 19 (Juneteenth) as their day of celebration.  Beginning in 1866 they held parades, picnics, barbecues, and gave speeches in remembrance of their liberation.  By 1900 the festivities had grown to include baseball games, horse races, street fairs, rodeos, railroad excursions, and formal balls.  Two distinct trends emerged with these early celebrations.  First the oldest of the surviving former slaves were often given a place of  honor.  That place of honor rose direct proportion to the dwindling numbers of survivors with each passing year.   Secondly, black Texans initially used these gatherings to locate missing family members and soon they became staging areas for family reunions.

By 1900, Juneteenth had unofficially become Texas Emancipation Day and was sponsored by black churches and civic organizations.  By that point it was so prominent that white politicians including various Texas governors addressed the largest gatherings (which sometimes included upwards of 5,000 people) in Houston and Dallas.  Juneteenth had  surpassed the Fourth of July as the biggest holiday of the year for Texas African Americans.

With the migration of African Americans from Texas to the West Coast, especially during World War II, Juneteenth simultaneously declined in Texas and grew in the emerging black communities of Los Angeles, San Diego, and Oakland in California; Portland, Oregon; and Seattle, Washington.  But by the 1970s many blacks, including those in Texas, had forgotten the holiday’s origins and its significance in African American history.

In the 1980s a number of local community activists rediscovered Juneteenth and persuaded public officials to embrace the holiday.  Not surprisingly, Texas in 1980 became the first state to declare Juneteenth an official state holiday.   Other states in the West began to recognize the holiday as well.  In 1994 the “Modern Juneteenth Movement” began when advocates from across the country gathered in New Orleans where they pledged to work for national recognition of the holiday.  A number of holiday promotion organizations emerged after that meeting including the National Association of Juneteenth Lineage (NAJL), the National Juneteenth Celebration Organization (NJCA), and the National Juneteenth Observance Foundation (NJOF).  In 1997 the U.S. Congress passed a resolution officially recognizing June 19 at Juneteenth Independence Day in the United States.  Three years later the first annual Washington Juneteenth National Holiday Observance took place in the nation’s capital.  By June 2020, 47 states and the District of Columbia had established either full or partial recognition of the holiday. Only Hawaii, North Dakota, and South Dakota have not.