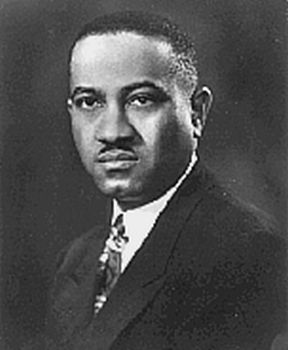 Born on February 17, 1906 in Cordele, Georgia, Sidney Barthwell was the founder of Barthwell Drugs, once the largest chain of black-owned drug stores in the United States. As a young man, he attended Lucius H. Holsey Academy of Excellence in Fitzgerald.  In 1922, he left Georgia and settled in Detroit, Michigan. Barthwell attended the prestigious Lewis Cass Technical High School where he enrolled in a course that specialized in pharmacological sciences.  After graduating from high school in 1925, Barthwell attended Detroit Institute of Technology (now Wayne State University College of Pharmacy and Health Sciences) and graduated in 1929 with a bachelor’s degree in pharmacy.  Barthwell was so poor at the time that the dean of the college had to loan him $25 to pay for his diploma.

Despite possessing a college degree, Barthwell struggled to find work during the Depression in the early 1930s. The pharmacy that eventually hired Barthwell was not only unlicensed, but also it was quickly evident that the business was financially insolvent.  Undeterred, he took over the failed pharmacy in 1933 and renamed it Barthwell Drugs.  It did not take long for Barthwell to become a well-known and respected figure in Detroit.  Barthwell made a point to help African Americans by either employing them or finding them work with other pharmacists.  Dozens of pharmacists would later claim they had their start at one of Barthwell’s stores.

Barthwell began opening a new store about every two years until he had thirteen stores around Detroit, including nine drug stores, a patent medicine store, and three ice cream parlors.  Although he did expand steadily, it was often difficult for Barthwell to get loans from banks, and he would often have to get more than one loan to finance a new store.  This situation stemmed partly from both discriminatory banking policies and the economic instability of the Depression.  Barthwell Drugs eventually became a substantial source of employment during the harsh economic times, especially with young black people.  Shopping malls, national chains, and the construction of interstate I-75 all contributed to the downturn in Barthwell Drugs’ revenue, and the last store closed in 1987.

Barthwell was the first African American member of the Detroit Retail Druggist Association, president of the Booker T. Washington Business Association, and a lifelong member of the National Association for the Advancement of Colored People (NAACP). He was also a delegate to the Michigan Constitutional Convention in 1962. He was a charter member of the Alpha Beta chapter of Kappa Alpha Psi at Wayne State University, where he later established a scholarship, the Sidney Barthwell Endowed Scholarship (1996), for students studying pharmacy.

Barthwell married his wife, Gladys, on Christmas Day in 1936 after a full day of work in his store.  They had two children, Akosua and Sidney Jr.  Sidney Barthwell died at Harper Hospital in Detroit on June 25, 2005. He was 99 years old.