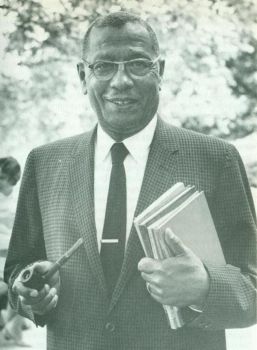 Rufus B. Atwood
Fair use image

Academic, leading educator, World War I veteran, and president of Kentucky State College for Colored Persons (later Kentucky State College for Negroes and now Kentucky State University), Rufus Ballard Atwood was born on March 15, 1897 near Hickman, Kentucky.  The child of former slaves, Atwood grew up in a racially segregated environment.  During Atwood’s youth, lynchings were not uncommon and the Night Riders instilled fear into many black residents of Hickman.  Although his parents had extremely limited education, they encouraged Atwood’s dreams of higher education.  After scoring the highest on an entrance exam out of 60 potential students, Atwood left Kentucky for Nashville, Tennessee where he entered Fisk University in 1915.

World War I interrupted Atwood’s studies when he enlisted in the United States Army on February 3, 1918.  Atwood found the Army to be more racially accepting than Hickman, but was disappointed when he was sent for training in Ohio and discovered that the North was not as tolerant as he believed.  After being assigned to signal corps of the all-black 92nd Division, Atwood was sent to France and served with distinction.  On November 10, 1919, the day before the Armistice, he was awarded a bronze star for bravery when he continued to operate a switchboard despite being under heavy artillery fire.

After his discharge from the Army, Atwood returned to Fisk and graduated in 1920 with a bachelor’s degree in biology.  Atwood then left the South to pursue another undergraduate degree at Iowa State Agriculture and Mechanical College (now Iowa State University).   At Iowa A&M Atwood met his future wife, Mabel Campbell, whom he married in 1921.  After graduating from Iowa A&M in 1923, Atwood accepted a position of professor of agriculture at Prairie View State Normal and Industrial College in Texas (now Prairie View A&M University).  In 1929, Atwood who was then only 32 years old, accepted the presidency of Kentucky State College for Colored Persons.

When Atwood assumed the presidency, Kentucky State “was a college only in name.”  The college was $18,000 in debt, the library was closed to students, campus facilities were in neglect, and none of the institution’s 27 teachers had earned a Ph.D. degree.  Atwood quickly set high standards.  Two years after Atwood arrived Kentucky State College for Colored Persons became an officially accredited institution.   Atwood also attracted support for campus improvements through New Deal ‘s Public Works Administration and the Julius Rosenwald Fund.  He continued his leadership to enhance both the intellectual and physical environment of the state’s only publicly funded black college campus throughout his 33-year career as president.

Atwood had tried to avoid politics and advocated a gradual path toward achieving civil rights.  By the early 1960s many of Kentucky State’s student activists became impatient with his approach.   The local Congress of Racial Equality (CORE), for example, called for his ouster.  Atwood retired from the Kentucky State presidency in 1962.  Rufus T. Atwood died on March 18, 1983, in Frankfort, Kentucky.