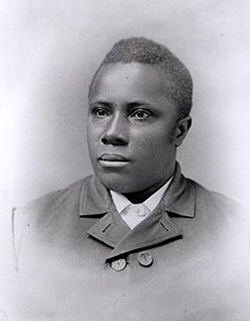 John L. Waller was a career Republican and activist who played a significant role in Kansas politics. He was born to slave parents, Anthony and Maria Waller, on a plantation in New Madrid County, Missouri. Some records suggest he was born in 1851, contrary to his own testimony. Waller and his parents were freed by a Union infantry regiment in 1862, and he moved to Iowa where the regiment was based.

Thanks to an Iowa farmer who hired him, Waller was able to attend school for four years starting in 1863. He graduated from high school in Toledo, Iowa but his college education was interrupted by an unidentified epidemic that affected his family whom he returned to support.

In 1874 Waller moved to Cedar Rapids, Iowa. He began to read legal documents, which led Judge N. M. Hubbard to place his entire legal library at Waller’s disposal. Waller made good use of that library and was admitted to the Iowa bar in 1877.

In 1878 Waller moved to Leavenworth, Kansas where he opened a practice. Success came slowly. Local whites preferred white attorneys and local blacks questioned his qualifications.  His skill as a lawyer, however, eventually won him both black and white clients. With that success, he turned to politics. In 1884 Waller, now also recognized for his speaking ability, was recruited by Leavenworth Republicans to tour eastern Kansas in support of the Republican ticket.

Three years later Waller received his first political appointment. On June 28, 1887, Waller was appointed deputy city attorney of Topeka, Kansas. After the appointment he contributed editorials to the Lawrence newspaper Colored Citizen. In the 1888 presidential election, Waller was the only black man in the United States to be selected for the Electoral College. He cast a vote for president-to-be Benjamin Harrison. In 1890 Waller ran unsuccessfully for Kansas state auditor.

The inability of black Republicans to move beyond local elective office left Waller disillusioned with his political chances in Kansas. He remained loyal to the Republican Party however and in 1891 was named by Harrison to be U.S. consul to Madagascar, a vast, underdeveloped island off the southeast coast of Africa then ruled by a monarchy.

Waller, convinced that overseas expansion by the U.S. would benefit American economy and black Americans, persuaded the island’s monarch to give him a concession of 15,000 acres that would be used for black American settlement after his term as consul ended in 1894. The French, however, viewed Waller’s activity as a threat to their colonial ambitions in Madagascar. Waller was subsequently accused by the French of providing sensitive military information to Madagascar’s indigenous people and was arrested. He was tried and convicted by a French colonial court and sentenced to prison in Marseille in 1894. He avoided the entire 20 years in prison only by the intervention of U.S. President Grover Cleveland, a Democrat, in 1895. The political storm surrounding the French arrest, trial and imprisonment of a former American diplomatic official came to be known as “the Waller Affair.”

John L. Waller returned to the United States and during the Spanish American War in 1898 he was an officer with the Twenty-Third Kansas Volunteers. In 1900 he retired from public life and settled in New York City with his family. Waller died of pneumonia in Yonkers, New York in October 1907.